The AMERICAN BITTERN in West Cornwall 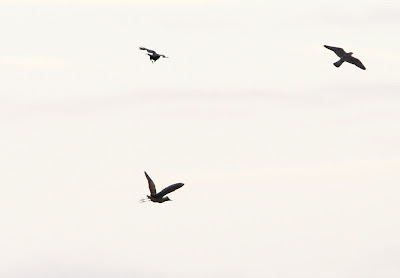 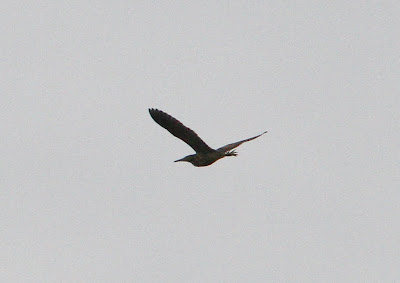 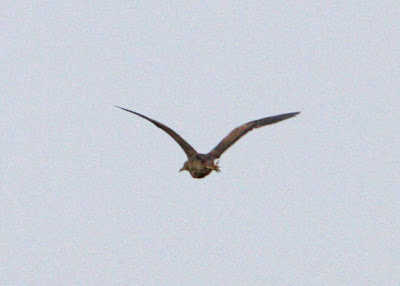 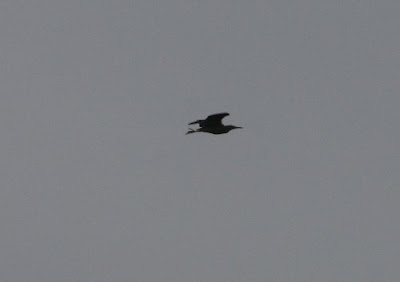 The American Bittern in flight and under concerted attack (Mark Stirland and Matt Deans - bottom)
There has been no sign of the American Bittern so far today at Trewey Common in West Cornwall, despite the presence of over 70 observers - so it looks as though it may have moved on.

I should just like to take this opportunity to thank Richie Moores for taking the time and energy to discuss this occurrence and for releasing the news at the outset - and for the farmer and his neighbours at Trewey Common who very kindly allowed access to their properties and fields - it was all very much appreciated.

The farmer and birdwatching friends of Richie's parents initially first noticed the 'bittern' at the beginning of last week, when it was to be seen commuting between the two ponds at the entrance to the farm. Richie was told about the bird on a family visit and checked it out on Thursday and was afforded several flight views of it. He managed a few flight shots of the bird concerned and emailed them around a close circuit of friends - it appeared to be an American Bittern.

It was eventually decided to release the news but on the pretense that some proper organisation was sought and arranged as this was a sensitive site and disturbance was likely to reap the twitch redundant. As such, Paul Freestone was contacted and filled in on the details. Parking was organised in Zennor (the nearest village) in an effort to prevent birders from parking by its favoured ponds rather than for other reasons.

As it was, the bird was still present on Friday morning but frustratingly Paul and others moved in at the site in the half-light rather than waiting for better conditions. Although the farmer had given them (18 birders in all) permission to walk around the pools, the fact that they left the road prior to 0800 hours meant that views were far from satisfactory. As a result, they misadvertently walked past the bird and it flew out of the sedgebed from behind them in very poor light at 0807 hours. It then darted out across the road and away over towards an area of gorse and was quickly propelled by a gale force southerly wind blowing behind it. It then flew into cover and disappeared (sheltered) and in very poor weather conditions was then flushed from bracken at about 0930. It then flew even further away and again was propelled by the fierce wind and ended up crash-landing in another area of bracken much further north. After a long search, it was eventually relocated but then flew east towards Zennor and disappeared behind the hillside, never to be seen again that day. I arrived on site at about 1230 hours and searched, along with 35-40 others, right up until dark without success. I soon realised its roost spot but did not see the bird return before dark - I feared the worst.

Allan and I decided to remain on site all night and I was up pre-dawn when the first of Saturday's twitchers began gathering on the road. By 0830 hours, the crowd had swelled to 140 observers. We waited patiently and carefully scanned its roost-area of sedges - Colin and a few others having glimpsed what may have been it lifting off of the main pool at around 0715 in the dark - presumably after a pre-dawn feeding session. By sheer amazement and completely of its own accord, the AMERICAN BITTERN flew from the sedges close to the road at 0855 hours and flew SSE over the line of pine trees. It appeared to come down in an area of gorse nearby where two pools had been illustrated on google earth. As Andy Clifton, Matt Mulvey, John Lees, Andy Horscroft and I attempted to locate the pools, the bird appeared from the gorse and flew up high, circling us overhead before flying strongly south and high down the main road. It then changed direction and flew east and as it was starting to lose height, an adult Peregrine took up pursuit and began attacking it. It took several lunges at the bird, at one point 'bashing' it on the crown, and then the bittern turned over, extended its long hind toe and grappled in mid-air with the attacker. The Peregrine fought ever more ferociously and as it was upside down forced the bittern down towards a line of garden pine trees and then as two Carrion Crows also came in to pursuit, the American Bittern crashlanded into the conifers of the Old Chapel House in the tiny hamlet of Carnaquidden. Jon Chappell managed to capture part of the attack on video - see link here
http://www.youtube.com/watch?v=npNnfHKsa40

There was some concern for the welfare of the bird so the small number of us present entered the hamlet and were very kindly and warmly welcomed by the residents. They were as excited about the appearance of the Bittern as we were and very kindly allowed us full access in an attempt to relocate the bird. It had last snuck down out of view in the pine at 0912 but despite an exhaustive search, we found no further evidence of it. After several hours, the crowd dissipated but at around 1320 hours, it flew from the pines and headed strongly north. It was not seen again before dusk.

Sunday morning dawned to the tune of a further 175 birder turn-out and after an hour or so after daylight, one individual was nominated and carefully walked around the edge of the sedge-bed and eventually it flew. The American Bittern flew out of the sedges and this time, perhaps remembering its altercation with the Peregrine, thought better of high-flying and landed in the line of firs behind the pool. Everyone managed to see the bird in flight and a lucky few saw it perched in the pine but for the remainder of the morning, it did not show - and later flew off south. At around 1615 hours, it was seen to return to the pool but there was no further sightings before dark. At around 1120 hours, the bird had been flushed from the Plantation.
Posted by Lee G R Evans at 12:14