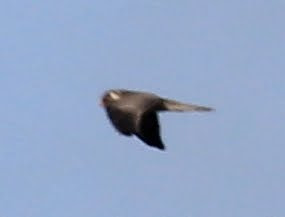 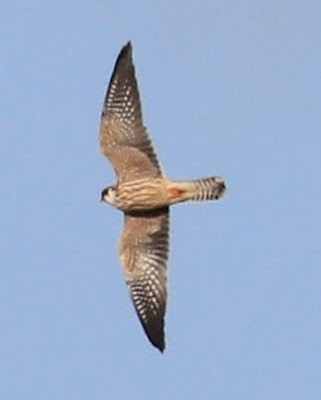 Graeme Leckie photographed this juvenile RED-FOOTED FALCON at Fife Ness yesterday afternoon. He and Kris parked at Kilminning NO631088 and walked along the Fife coast path to the Fife bird club hide at NO638097 and the falcon was seen en-route at approximately NO636092 at 11:40. It was photographed and observed by Kris and Graeme as they were was returning to the car to get her walking poles!!!, but on return Graeme got a quick view of it at around 11:50, and that was the last time it was seen.
Dick Forsman kindly commented - ''Lee, this bird is a juvenile, and I think the intense tawny and buff coloration of the underparts rule out Amur, which should be more pied. The upperparts colour, as seen here, is highly susceptible to the angle of light, sometimes appearing grey, and the next moment Merlin-brown''
This is the second Red-footed Falcon I have been sent in a month - another individual being photographed very late in the New Forest in Hampshire.
Posted by Lee G R Evans at 12:05