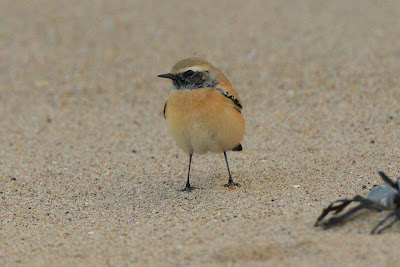 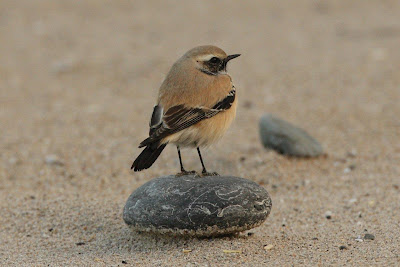 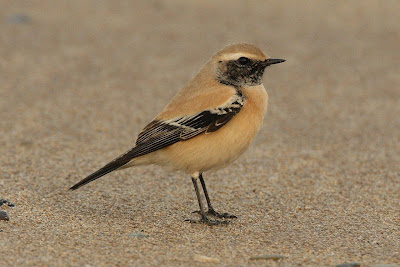 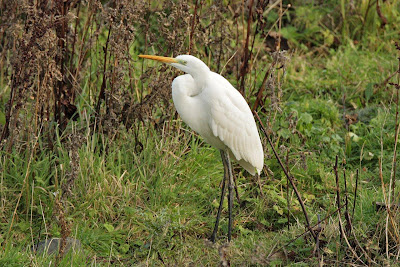 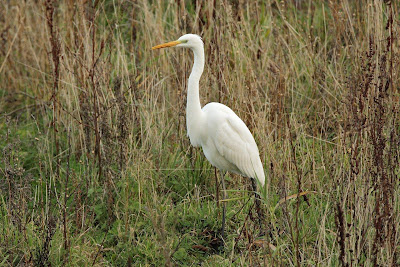 Tom Tams obtained these outstanding shots above - firstly the male DESERT WHEATEAR that spent three days earlier this week at Seahouses (Northumberland) and the GREAT WHITE EGRET that was not far away near Alnmouth. 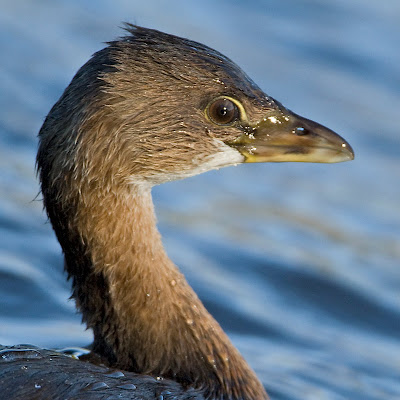 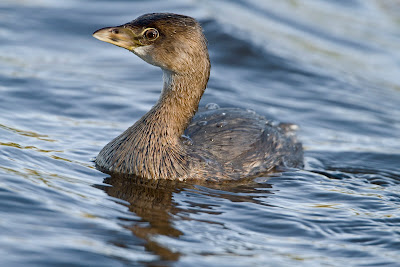 What may well be Northumberland's first-winter male DESERT WHEATEAR was discovered in North Yorkshire today, showing well three fields to the north of the seawatching hut at the Long Nab, Burniston, until dusk (at TA 025 947. Please view ONLY from the Cleveland Way and DO NOT access fields in this vicinity.

Meanwhile, in Greater Manchester, the confiding first-winter PIED-BILLED GREBE is still performing well often directly in front of the hide at Hollingworth Lake Country Park - walk 18 minutes SE of the main car park and Visitor Centre to the far SE corner of the lake. See photos above.

At the opposite end of the country in West Cornwall, the Lost Gardens of Heligan still retain their greatest attraction in the form of the confiding first-winter AMERICAN GREEN HERON.

A PALLAS'S LEAF WARBLER was trapped and ringed at Kew Villa, Kilnsea (East Yorks), early morning, with another on Bardsey Island (North Wales) and a further in Horseshoe Plantation, Beachy Head (East Sussex) (and following one recently at Gibraltar Point NNR, Lincs), with a YELLOW-BROWED WARBLER at Caerlaverock WWT (D & G) and a very late WRYNECK in South Devon at Sheldon, east of the A379 in scrub below the car park at Labrador Bay.

The juvenile LONG-BILLED DOWITCHER was still present at Lodmoor (Dorset) today, commuting between the pools in front of the viewing shelter and those at the east end of the main marsh adjacent to Beachdown Way; a female SMEW was also at the reserve. In East Anglia, the juvenile AMERICAN GOLDEN PLOVER remains in Blakeney Harbour (Norfolk).

The first-ever STONE CURLEW for North Ronaldsay (Orkney) was a surprise find today and typical of the avian gems that any South-easterly blows in. Likewise a WOODLARK on Inner Farne (Northumberland) was exceptional.

The typically confiding GREY PHALAROPE remains for a fourth day on the tiny flash south of the River Aire, at Bradley Ings, close to the footpath at SD 998 469 at Cononley (North Yorks) with another in Lancashire at Walney Island. A SURF SCOTER was in Fishguard Harbour (Pembs) today, lingering between the inner breakwater and the Fishguard Fort

Both the adult and juvenile ROUGH-LEGGED BUZZARD continue to forage the Burnham Overy Dunes (North Norfolk) with another near Willingham (North Lincs) and at least one on the moorland near Guisborough (Cleveland).

Inland LONG-TAILED DUCKS remaining include single immatures at Pugney's Country Park, Wakefield (West Yorks), Rockford Lake, Blashford Lakes HWT (Hants) and at Swavesey Lake, Fen Drayton Lakes RSPB (Cambs), whilst a RED-NECKED GREBE is present for a second day at Cutt Mill House Pond (Surrey) and SLAVONIAN GREBES at Audenshaw Reservoirs (Greater Manchester) and at a number of sites in NW England. At Farmoor Reservoir (Oxon) this afternoon, a GREAT NORTHERN DIVER was new in, whilst the Broadwater Sailing Club Lake (Middlesex) juvenile drake VELVET SCOTER remains, as well as immatures at Filby Broad (Norfolk) and King George VI Reservoir (Surrey). A drake SMEW was on the Motel Pit at Far Ings NR (North Lincs) today, with a redhead on Crookfoot Reservoir (Cleveland) and another off of the dam at Belvide Reservoir (Staffs). Much farther north, a redhead is on Loch of Kinnordy RSPB (Angus/Dundee).

The wintering flock of at least 55 LAPLAND BUNTINGS is still to be found in the winter stubble fields just inland of the coastal footpath at Happisburgh (Norfolk), whilst on the north coast, at least 20 SHORE LARKS are roaming the saltmarsh at Holkham Gap.

The Yare Valley TAIGA BEAN GEESE are very early back this winter, perhaps a precursor of another severe winter to come, with 37 today at Cantley Marshes RSPB (Norfolk). Up to 221 are back in the Slammannan area of Forth District in Central Scotland.

In IRELAND, a first-winter SEMIPALMATED SANDPIPER is showing well at Ballycotton (County Cork) but the recent AMERICAN COOT in County Mayo did not get reported today.

A party of 6 BEARDED TITS remains at the Lingstown Reedbed, Tacumshin (County Wexford) where the juvenile NORTH AMERICAN HEN HARRIER can still be found as well as the elusive CETTI'S WARBLER. In neighbouring County Waterford, the three EURASIAN SPOONBILLS were again in Dungarvan.