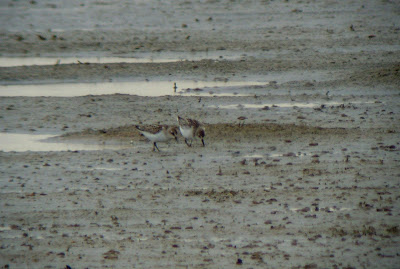 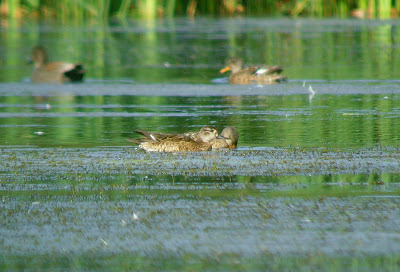 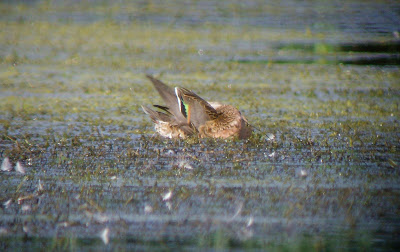 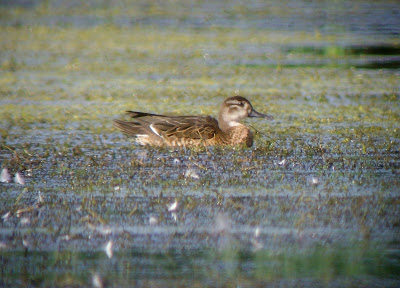 It has been SHETLAND which has been making all of the headlines in the past week and with up to 160 observers scouring every nook and cranny of suitable habitat in search of rarities, an impressive haul has been unearthed. The star of the show still remains that snowball of a first-winter HORNEMANN'S ARCTIC REDPOLL on Unst at Norwick, whilst an AMERICAN BUFF-BELLIED PIPIT remains at Esha Ness and a presumed SYKES'S BOOTED WARBLER is still being fleetingly glimpsed at Channerwick. The Out Skerries continue to host both a BLACK-HEADED BUNTING and a CITRINE WAGTAIL, with the two juvenile BUFF-BREASTED SANDPIPERS still by the lighthouse at Esha Ness machair and at least two LITTLE BUNTINGS remaining on Unst. Elsewhere, a scattering of Yellow-browed Warblers, Barred Warblers, Lapland Buntings and Common Rosefinches.

At the opposite end of the country, SCILLY has been very poorly represented - and with just 45 observers in town, perhaps not that surprising. Moving in front of the latest depression to be crossing the Atlantic was a freshly-arrived juvenile AMERICAN GOLDEN PLOVER today - moving from Porthcressa Beach to finally settle on the St Mary's Airfield. A RUSTIC BUNTING on St Agnes was also early for that archipelago but it quickly disappeared into cover and was not relocated. Porthellick Pool still hosts the long-staying juvenile SPOTTED SANDPIPER and the Pectoral Sandpiper as well as Jack Snipe, whilst a RED-BREASTED FLYCATCHER was near Longstone and WRYNECKS were on Bryher and Wingletang Down, St Agnes..

West Cornwall is struggling to provide much of avian interest in this past week but a confiding and easy first-winter male SIBERIAN STONECHAT is the best on offer, sharing a roadside field with 2 Whinchats and a Common Stonechat near Gurland Farm, adjacent to the road to Nanquidno at SW 367 286. Also popular is an adult drake SURF SCOTER in Mount's Bay, Penzance, often scoped from the Jubilee Pool by the quayside, with a juvenile ROSE-COLOURED STARLING nearby roosting with Common Starlings on St Mary's Church in Penzance.

It has been an excellent year for WILSON'S PHALAROPES with the first-winter at Welney Refuge (Norfolk) still showing well today on the main lagoon in front of the Observatory. Late juvenile RED-NECKED PHALAROPES included singles at Cley NWT (Norfolk) and Blagdon Lake (Somerset) with a juvenile GREY PHALAROPE from recent gales still on show at Burnham Overy Dunes (Norfolk) - Norfolk clearly allowing all three species to be netted in one day !

It has also been an exceptional autumn for SEMIPALMATED SANDPIPERS with the latest - a juvenile with up to 5 Little Stints -arriving on the extensive mud at Abberton Reservoir (Essex) on Sunday. The bird was still to be seen today and showing from the boardwalk vantage point close to the Information Centre.

The long-staying and most incredibly confiding juvenile SPOTTED SANDPIPER remains on the Exe Estuary at the Turf Hotel, Exminster (South Devon) where it can be accessed whilst essential road repairs are taking place along the trail from the RSPB car park adjacent to the railway bridge. In Dumfries and Galloway, a late and confiding juvenile DOTTEREL is at The Wig at Loch Ryan, Stranraer.

Whilst the pair of ROSS'S SNOW GEESE have made a sudden disappearance after a two-week sojourn in the Aberlady Bay area (Lothian), another has appeared with the 65,000 or so returning Pink-footed Geese at the Montrose Basin (Angus/Dundee) and the Caerlaverock WWT (D & G) adult of suspect origin relocated with Barnacle Geese to Rockcliffe Marsh (Cumbria). An adult RED-BREASTED GOOSE located with newly-arrived Dark-bellied Brent Geese at Thorney Island (West Sussex) on Saturday was sadly sporting a red plastic ring whilst concern is mounting if the family party of 5 unringed individuals decide to depart Minsmere RSPB Levels for pastures new.

The drake FERRUGINOUS DUCK remains at Wintersett Reservoir west bank (West Yorks) with up to 3 in residence at Chew Valley Lake (Avon) whilst perhaps of natural origin was a juvenile BAIKAL TEAL at Chigborough Lakes EWT (Essex) on Saturday morning; the bird had arrived with a noticeable increase in Wigeon numbers (see Adrian Kettle's images above). A drake LESSER SCAUP continues to be seen off of the Hensborough Bank at Draycote Water (Warks), whilst the first-summer drake KING EIDER continues to range between Dunwich Cliffs and Minsmere Sluice (Suffolk).

Remnants from last week's fall on the East Coast of Britain include a very confiding, pale and white-winged juvenile WOODCHAT SHRIKE at the Croft Terrace Park on Hartlepool Headland (Cleveland), an adult NORTHERN GREY SHRIKE at the Sands of Forvie NNR (Aberdeenshire) and a female/first-winter RUSTIC BUNTING at North Landing, Flamborough Head (East Yorks). Newly discovered though was a juvenile RED-BACKED SHRIKE by Meadow Road Children's Play Area in Cromer (Norfolk).

Tiree (Argyll) birder John Bowler continues to reap rewards after his outstanding NORTHERN PARULA find of recent times and today located a BLUETHROAT at Balemartin. Another BLUETHROAT was seen at St Margaret's at Cliffe (East Kent) yesterday morning, with another trapped and ringed at Romsey Water Meadows (Hampshire) at the weekend. Tiree today also hosted a GREATER SHORT-TOED LARK at Sandaig, 2 PECTORAL SANDPIPERS and a BUFF-BREASTED SANDPIPER with European Golden Plover at Heylipol and 2 GREY PHALAROPES off Hynish.

The LAPLAND BUNTING invasion continues unabated with very large numbers still present on the Northern Isles, with more notably two at the Sence Valley Forest Park in Leicestershire and at least one at Abberton Reservoir (Essex).

There has also been large numbers of RING OUZELS on the move, with a RED-RUMPED SWALLOW south over Donna Nook (North Lincs) this morning.

Other long-stayers include the WHITE STORK on the Wareham Bypass Water Meadows (Dorset) and the exceptionally confiding juvenile GLOSSY IBIS on the West Marsh at Stanpit Marsh, Christchurch Harbour (Dorset).

In addition to the aforementioned Dendroica in Cork, which incidentally moved towards the Cotter's Garden late on, IRELAND today also played host to a possible CHIMNEY SWIFT at Farranfore Airport (County Kerry) and the first-winter WILSON'S PHALAROPE reappeared at the Webb's Field at Kilcoole (County Wicklow). Interestingly, two WILSON'S PHALAROPES had been seen near the Wellington Bridge at Barrystown (County Wexford) on 28 September.

Tacumshin Lake continues to harbour a host of vagrants, including a WILSON'S PHALAROPE and LESSER YELLOWLEGS, with 3 GLOSSY IBISES at Ring Marsh (Wexford), BLUE-WINGED TEAL at Rahasane Turlough and ROSE-COLOURED STARLING at Garinish (Cork). An impressive find was an AMERICAN BUFF-BELLIED PIPIT at Truska, Slyne Head (County Galway) on Sunday.
Posted by Lee G R Evans at 23:02