How unlucky is that ? 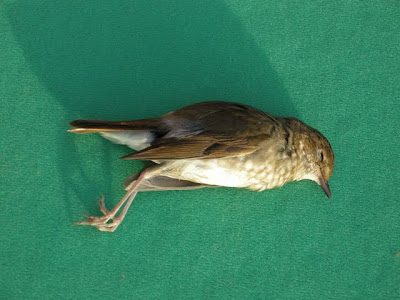 http://northronbirdobs.blogspot.com/
When Mark Warren wandered out in the field early on 2 October, little did he expect to stumble on a second for Britain only yards after leaving the North Ronaldsay Bird Observatory on Orkney. Following nearly a week of gale force South-Easterlies, this foul weather proved all too much for this major distance waif - Mark picking up a freshly dead RUFOUS-TAILED ROBIN, a species which breeds in southern Siberia from northern Sakhalin and the Russian maritime provinces bordering the Sea of Okhotsk, west to the Altai Mountains and the upper Yenisey River and south to the mountains of NE China.

There is just one previous British record - a first-winter trapped and ringed on Fair Isle on 23 October 2004 (British Birds 99: 236-241) - whilst just over a year later, on 30-31 December 2005, another was seen and photographed at Bialystok Sewage Works in Eastern Poland - the only two West Palearctic occurrences.
Posted by Lee G R Evans at 23:13