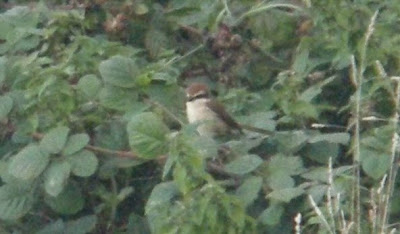 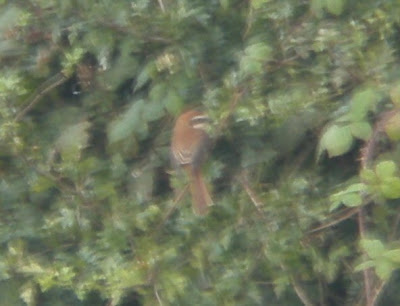 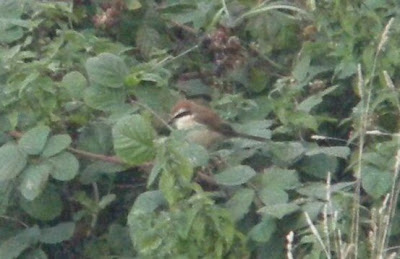 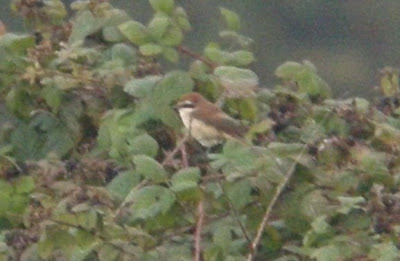 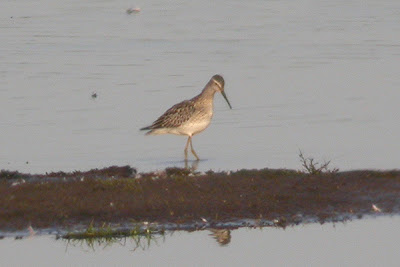 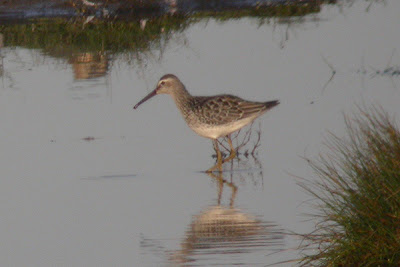 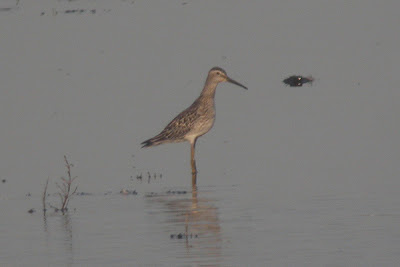 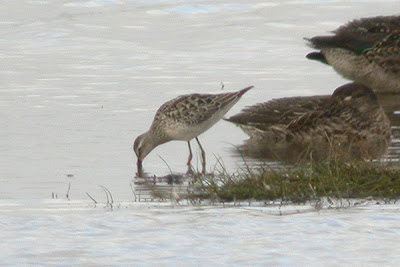 TODAY'S IMAGES
Adult BROWN SHRIKE at Old Fall Hedgerow, Flamborough Head, East Yorkshire, this evening. Intrepid local birder Tony Dixon rattled off these four record shots this evening just prior to the bird going to roost.
A superb juvenile STILT SANDPIPER in Cumbria photographed by Darren Robson, the first observer to question the bird's identification.
Fresh Northeasterly winds associated with a band of rain and a high pressure system extending over Europe as far as the Ukraine has met with some outstanding results this afternoon. The entire east coast of Britain may well be getting bathed with mouthwatering eastern vagrants as they become displaced by the weather. Already today we have seen two 'grade 1' Siberian vagrants appear, with a first-winter ASIATIC BROWN FLYCATCHER on Fair Isle (Shetland) and an adult BROWN SHRIKE at Flamborough Head (East Yorkshire).

The BROWN FLYCATCHER was discovered this morning and has showed well throughout the day on the perimeter fence of the transmitter just above the airfield. It is the second record for the island and follows hard on the heels of last year's October bird at Flamborough Head.

The BROWN SHRIKE was discovered at the Old Fall late afternoon and remained on view (albeit distantly) until just before dusk, when it presumably roosted

ACCESS INSTRUCTIONS: Park only in the designated and specially organised field on the north side of Lighthouse Road and walk along 120 yards to the east to continue south down the Old Fall Hedgerow to view. Parking costs £1.00 per person.

Also remarkably early is an OLIVE-BACKED PIPIT at Spurn Point (East Yorks), showing by Post 43 and 44 on the seaward side of the Blackthorn this evening, whilst an EASTERN OLIVACEOUS WARBLER remains for a second day at Harrier on Foula (Shetland).

In Norfolk, an adult LESSER GREY SHRIKE arrived off the sea this evening and landed to the west of Sheringham on the cliffs and scrub just west of the golf course (viewable by walking east half a mile from Weybourne pay & display car park), whilst a MELODIOUS WARBLER performed on Blakeney Point until late evening in sueda clumps 350 yards east of The Marrams. An early RADDE'S WARBLER showed intermittently in Wells Woods this afternoon, in dense scrub and thickets NW of the westernmost drinking pool (now largely overgrown), whilst a SIBERIAN STONECHAT was east of West Runton this evening, feeding around the disused farm buildings (please keep to public rights of way). A BLUETHROAT was seen briefly by Titchwell Bank (where both the Pectoral sandpiper and juvenile RED-NECKED PHALAROPE remain on the freshmarsh), with Red-breasted Flycatchers in Great Yarmouth and Caister Road Cemeteries and at Eccles. A Northern Grey Shrike was at Wells Woods west of the Pinewoods Caravan Site, whilst Yellow-browed Warblers were arriving all afternoon.

In neighbouring Suffolk, a first-winter RUSTIC BUNTING was trapped and ringed at Landguard NR (where it was last seen in the field just after 1600).

On the Northern Isles, a major fall of Yellow-browed Warblers has taken place, involving at least 85 birds, including 40+ on Fair isle and 20+ on North Ronaldsay alone, whilst of the 'cream of the crop', a first-winter BLYTH'S REED WARBLER trapped and ringed at Quendale (Shetland) skulked elusively in the Mill Burn 200 yards above the dirt track and a RED-FLANKED BLUETAIL arrived on Fair Isle. Foula has Pectoral Sandpiper and Icterine Warbler.

In Cumbria, a superb juvenile STILT SANDPIPER (presumably the Uist bird of last week) graces the scrape north of the latby at Campfield Marsh RSPB, 2 miles WSW of Bowness-on-Solway, at NY 192 612. Further vagrant waders include the continuing juvenile LESSER YELLOWLEGS at Guardbridge (Fife) on the north side of the Eden Estuary just west of Shelley Point (at NO 470 200), with two AMERICAN GOLDEN PLOVERS together at Boddam (Shetland) behind Dalsetter this afternoon and the juvenile HUDSONIAN WHIMBREL still present on Porthloo Beach, St Mary's (Scilly).

Juvenile ROSE-COLOURED STARLINGS remain at Cross Common on The Lizard and another near Land's End and St Levan (Cornwall), with a juvenile Red-backed Shrike at Loe Pool east of Carminowe Creek.

In Southampton (Hants), a ship-assisted female COMMON YELLOWTHROAT survives for a 5th day on board the MV Aurora still docked in the city.
Posted by Lee G R Evans at 21:52