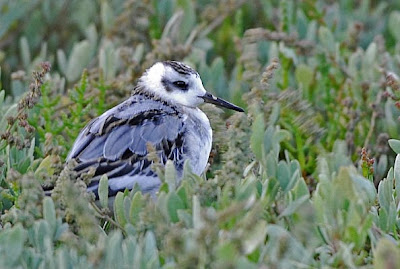 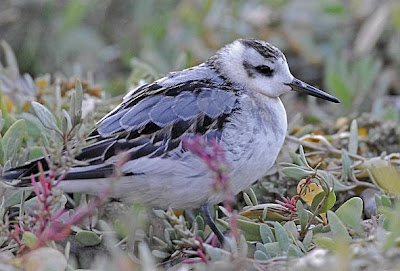 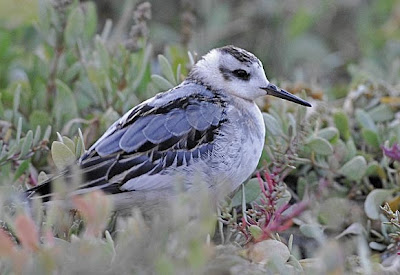 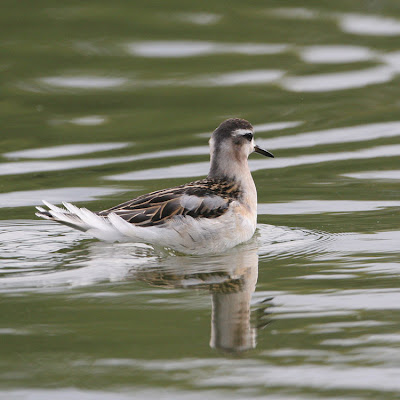 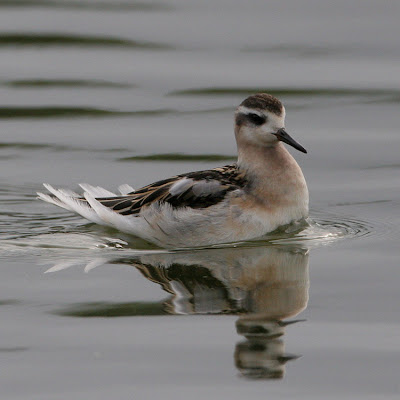 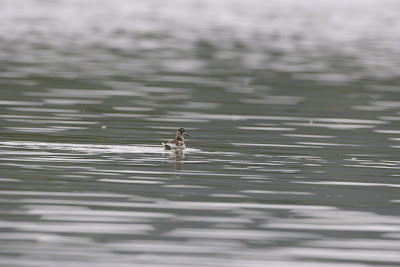 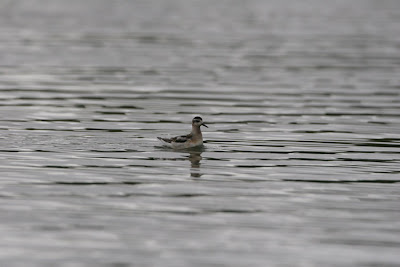 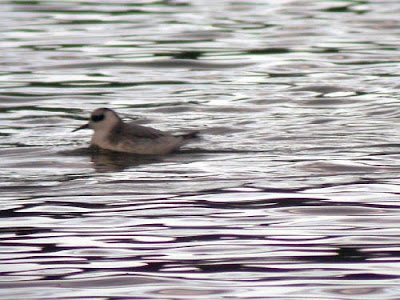 A period of very unsettled weather from 2-5 September 2008 saw a large displacement of GREY PHALAROPES both inland and on the coast of Britain. The vast majority were juveniles, pushed out of the Atlantic Ocean by the storm-force winds, and involved at least 47 individuals.
North and South Wales perhaps recorded the largest numbers, with first-winters on the Gower Peninsula at Wernffrwd and at Pembroke Mill Ponds (Pembs) on 2nd September, with two in Carmarthen Old Harbour at dusk and on the Ogmore Estuary (Glamorgan), and another at Loughor Bridge (Glamorgan). A further bird was on the estuary at Dulas Bay (Anglesey) on 2nd, with 3 over the high tide at Wernffrwd on 3rd and another past Bardsey Island (Gwynedd). Three were on the Ogmore Estuary on 3rd-4th, with 4 west past Porthcawl (Glamorgan) on 4th, and 3 in the Llanelli (Carmarthen) area on 4th (15+ in total)
Along the South Coast, a juvenile was at Middlebere Creek, Poole Harbour (Dorset) on 2nd, whilst seawatching produced 5 past Pendeen Watchpoint (Cornwall) on 2nd, one on the sea off Selsey Bill (West Sussex) on 2nd & 5th, two in Chesil Cove, Portland (Dorset) on 4th, on the Fleet at Rodden Hive (Dorset) on 4th, west off Branksome Chine (Dorset) on 5th, on the sea off West Bay, Bridport (Dorset) on 5th, off Dawlish Warren (Devon) on 5th, past Splash Point, Seaford (East Sussex) and two on Lodmoor RSPB (Dorset) on 5th. (17)
INLAND STRANDINGS - 14 between 2-5 September
The first hint of a wreck came on 2nd, when a juvenile was on Queen Mother Reservoir (Berkshire), quickly followed on 3rd, when moulting juveniles appeared on Newhaven Tide Mills (East Sussex) and on Sidlesham Ferry Pool (West Sussex), the former dying of exhaustion/starvation next morning and the latter remaining until at least 5th. Next came another juvenile by the old boathouse at Kenfig Pool NNR (South Glamorgan) (3rd-5th at least) followed in the afternoon by an adult winter and juvenile together on Weston Turville Reservoir (Bucks) (the former remained for just over an hour and the latter until 1230 hours the following day - 9th-10th sounty records). In the evening, a further juvenile arrived on Chasewater (Staffs), showing well on the Sailing Club shore (to 5th).
On 4th, one was seen briefly on Foxcote Reservoir (North Bucks), with another very confiding juvenile on the flood beyond the lock at Altofts (West Yorks) (present until at least 5th) and further juveniles/first-winters on Queen Mary Reservoir (4th-5th), at Farmoor Reservoirs (Oxfordshire) on 5th, Shustoke Reservoir (Warks) (5th) and at Prescot Reservoirs (Lancs) on 5th. One was also briefly at Cheddar Reservoir (Somerset) on 5th.
Posted by Lee G R Evans at 23:07