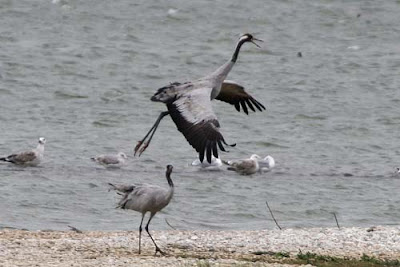 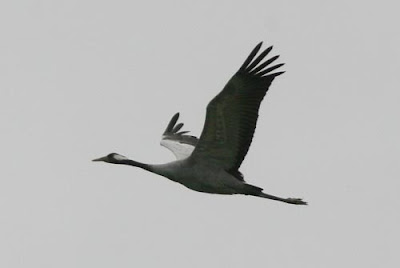 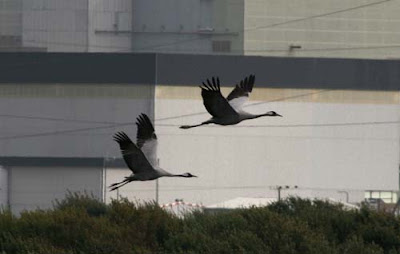 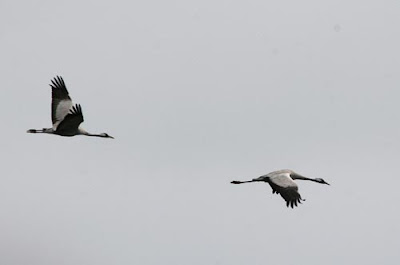 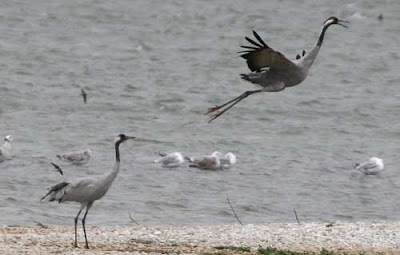 Common Cranes, Dungeness Area, Kent, August 2008 (David Walker)
These two COMMON CRANES flew over Dungeness ARC Pit at 1600 hours and appeared to land near the Oppen Pits on 23 August. Next day, they were present on the reserve for much of the day but in the evening made a circuit of the Point and thus flew into Observatory airspace. On 25th, they were present on the ARC Pit for most of the afternoon and even engaged in several bouts of ''dancing'', and took up temporary residence in this area until at least 1st September (today). See http://www.dungenessbirdobs.org.uk/ for all Dungeness Observatory news.
MONDAY 1ST SEPTEMBER
It was another wonderful day here at Dungeness. The two long-staying COMMON CRANES (see photographs above) spent most of the day at the ARC pit although they did venture over Burrowes pit and New Diggings during the afternoon and spent some time out of sight on the shingle. Yesterday's elusive juvenile WHITE-WINGED BLACK TERN was more obliging today and could be seen over the ARC pit. Two BLACK TERNS were also present and three LITTLE GULLS. An OSPREY was seen flying over Burrowes pit and a HONEY BUZZARD over the ARC pit. Three HOBBIES were seen around the trail. There were still plenty of waders to be seen from the Hanson-ARC hide including COMMON GREENSHANK (at very close quarters), WOOD SANDPIPER and LITTLE STINT. At least three BLACK-NECKED GREBES were seen and the first NORTHERN PINTAIL of the autumn. Passerines on the move included two COMMON REDSTARTS near the Hooker's pits viewing ramp, three NORTHERN WHEATEARS by the access track and several LESSER WHITETHROATS.
Christine Hawkins, Visitor Centre Manager, RSPB Dungeness Nature Reserve
Posted by Lee G R Evans at 20:37