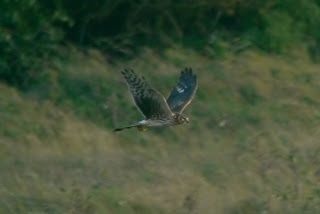 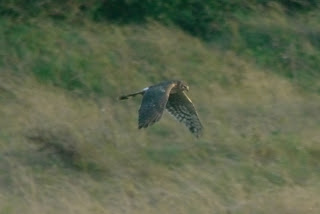 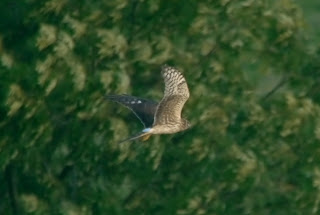 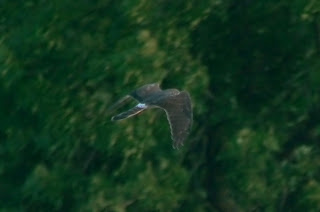 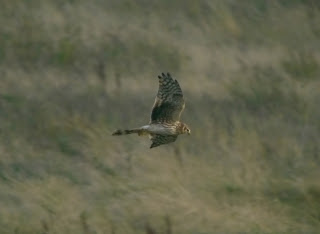 Last night, Joan, Anna and I travelled north to FIRSBY RESERVOIR, just NNE of Ravenfield (South Yorkshire), to see a ringtail harrier that had been roosting each evening in setaside adjacent to the reservoir for three weeks. We joined about 35 predominantly Yorkshire birders and at 1740 hours, we enjoyed excellent views of the bird as it flew in to roost. It paraded in front of us for about five minutes before dropping out of sight onto the ground. Doncaster birder JUSTIN CARR, who was standing beside me, obtained this excellent series of flight shots as it wheeled round, enabling a detailed examination of the bird.

Although we can never be sure that this female has not got some second or third generation Hen Harrier genes, the fact that it has just FOUR fingered primaries and a wing point formed bu just three primaries immediately suggest PALLID HARRIER. It has a neat, thin, pale collar extending from the nape to the throat, fine streaking on the breast-sides, saturated streaking on the upper breast and streaking on a white base.

It has strongly marked secondaries with no prominent dark trailing edge, some clear 'boomerang' like pale areas at the primary bases and primary barring concentrated along the middle section of the feather tract. the dark tips to the primaries are also much reduced.

A great local find and a great bird, departing the roost-site at 0720 hours this morning (but not returning this evening)

DIRECTIONS: In Ravenfield village,walk east along Garden Lane for 600 yards to the sharp corner before heading north along Arbour Lane for about three quarters of a mile to the end. Skirt the south side of the reservoir to watch from the gate on the east side.
Posted by Lee G R Evans at 21:52