HORNEMANN'S ARCTIC REDPOLL in North Norfolk - and I missed it 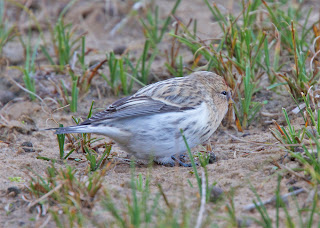 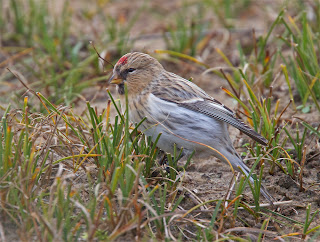 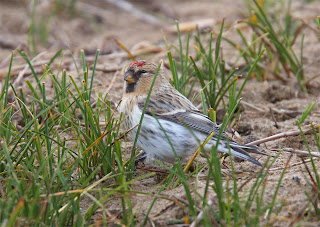 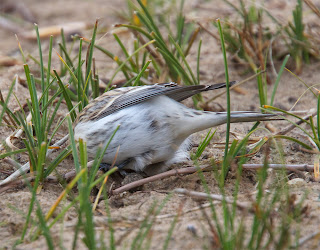 On Friday (26 October), Josh McCallum-Stewart located a large fluffy redpoll feeding alone in the dunes at Holkham Beach, some 800 yards west of the Gap. The fact that it had a striking, clear white rump immediately led Josh to realise he had an Arctic Redpoll - but which one? An hour later, local birders Si Dennis and Steve Hack independently stumbled across it and phoned it in to the Information Services. As soon as the pager reported a redpoll feeding in the dunes, I was concerned - and telephoned Neil Alford, Mark Golley and a number of other North Norfolk birders - in the hope that it would quickly get checked out. With very strong northerly winds bathing Norfolk in recent days and with an unusual number of Hornemanni about the Northern Isles, I was really worried about this bird. In fact, Steve and Simon even reported it as a Hornemanni but it seems this message was ignored - just Arctic Redpoll being relayed.

What made matters worse was the bird's insistence to remain elusive and although a lot of people searched for it later, only Peter Glute connected briefly at 1700 hours. Nobody was any wiser.

Anyway, Saturday dawned and a few diehard observers ventured out into the dunes and eventually located it. A considered Redpoll expert was amongst those looking at it and frustratingly his choice of id was exilipes (aka as Coues' or Scandinavian Arctic Redpoll). Seeing this come up on the pager, I contacted Mark Golley and after listening to the description of the bird MAG had been given by observers, I decided it was not worth persuing and drove off in the direction of Somerset for a showy Hoopoe - what a disastrous and catastrophic decision that turned out to be.

At around 1500 hours, RBA took some worrying phone calls relating to the appearance (and tameness) of the Holkham Redpoll - and getting hold of Neil and Mark it was clear that a major cock-up had been made. This was no ordinary Arctic Redpoll but a HORNEMANN'S ARCTIC REDPOLL - the rarest of them all and a real Shetland speciality - and the first-ever UK Mainland individual. I was mortified - suicidal - absolutely numb - 290 miles away at Weston-Super-Mare !

Incredibly, even after RBA had highlighted its presence as a true snowball, interest was slight - just 35 observers joining Richard Millington, SJMG, Jim Lawrence, Mark and Neil during the late afternoon. Incredible.

I drove home deeply depressed, knowing full well the enormity of my mistake and mis-judgement - after all, hornemanni is a £300 plus bird to get. It has been a real bogey bird of mine for years and at last I had the opportunity to grip back a bird. Fat chance of that I thought. The weather forecast depressed me even further - the strong Northerly winds were to drop overnight and veer WSW.

Anyhow, Allan Stewart and I arranged to meet at 0500 hours and arrived at Lady Anne's Drive at 0715 hours. It was bleak and from the word go, I admitted defeat - Starlings were pouring west at a rate of over 1,000 an hour - it was clear migration was in full swing. I joined James McCallum, Andy Bloomfield, Neil Bostock, Alan Lewis and Graham Ekins in the dunes and walked aimlessly for miles and miles of dune-slack. After three circuits, I was tired - and despite back-up in the form of Chris Batty, Andy Clifton, Malcolm Goodman, Phil Rhodes and others later, the Arctic wanderer was nowhere to be found - we had all mostrously dipped !

And the beast itself - just look at Jim Lawrence's mouthwatering shots above. Showing down to just a few feet, this was a Hornemanni from the start. Just look at the bulk of the bird and its heavily feathered thighs and deep-based bill. Although not as white as many, this first-winter showed all of the traits associated with this mega-rare - large size, large head and steep forehead, long tail, long primary projection. honey-buff face and frontage extending onto the upper breast, broad-fringed tertials, obvious tramlines, indistinct narrow streaking on the flanks, restricted crimson forecrown, massive bulging unstreaked white rump and spartan undertail-covert streaking.

Unsurprisingly, this represents the first record for Norfolk, although there is a video of a late September 'Arctic Redpoll' seen by Dick Bagnall-Oakley in Wells in 1966 (from 28 September to 10 October) which may have related to this species.
Posted by Lee G R Evans at 21:10