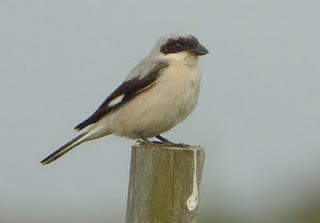 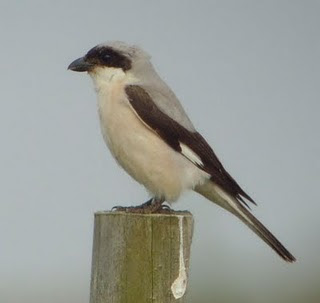 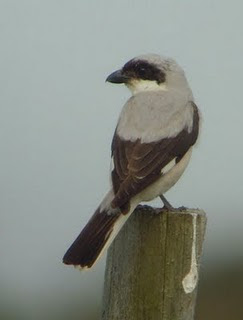 Since my last update. the total number of species recorded in combined Britain and Ireland has risen to 383.......with the addition of six new birds, namely MARBLED DUCK (a post-breeding disperser in Sussex), PACIFIC GOLDEN PLOVER (2 individuals in Northern Ireland), WHITE-RUMPED SANDPIPER, CASPIAN TERN (a ringed individual on the East Coast), WESTERN BONELLI'S WARBLER (a rare inland songster) and LESSER GREY SHRIKE (in Pembrokeshire).

As for the latter species, this first-summer individual was still present last night for its second day west of St David's and just north of St Justinian's car park in gorse and bracken along the coastal footpath - showing well. The singing male WESTERN BONELLI'S WARBLER continues at Arnfield Reservoir (NW Derbyshire) (directions as previously directed) with the male BLACK-HEADED BUNTING still at Schoolton on Fair Isle (Shetland).

A single GREAT WHITE EGRET has returned to Pitsford Reservoir (Northants), favouring the Walgrave Bay, where also the summer-plumaged SLAVONIAN GREBE remains in the Scaldwell Bay. Meanwhile, the other summering GREAT WHITE EGRET continues on Denge Marsh in East Kent.

The juvenile WHITE-TAILED SEA EAGLE is still roosting regularly in a favoured tree by Ruckland Ponds (Lincs), SW of the A16 near Burwell

In Northern Ireland, the two PACIFIC GOLDEN PLOVERS remain at Lough Foyle (County Derry) at the mouth of the Roe Estuary at the north end of the Turf Fields at the Myroe Levels.
Posted by Lee G R Evans at 10:20