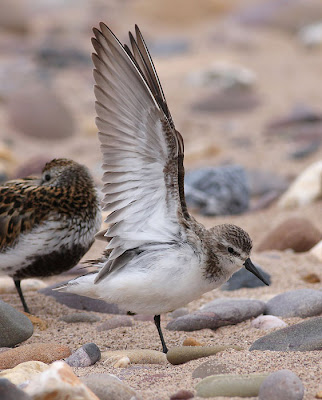 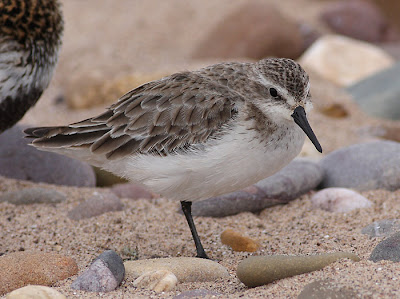 Nonbreeding plumaged perhaps first-summer Western Sandpiper, Dawlish Warren NNR, South Devon, 28 May 2009 (James Packer)
Following up my earlier correspondence relating to the 'peep' currently 'summering' at Dawlish Warren NNR in South Devon. At my second attempt yesterday, I finally managed to see the bird for myself and was able to enjoy sensational close views for over an hour at high tide (down to about five feet). I was joined by Somerset birder James Packer and he was able to get some outstanding 'new' images, which I link to below. Also Dawlish regular John Fortey obtained a sequence of video, and photographed the feet (also linked) -:

The bird in my opinion is a nonbreeding-plumaged male (most likely first-summer) WESTERN SANDPIPER, based mainly on the structure of the bird, and supporting characters of plumage state and wear and the bill length.

The bird is part of a 64-strong flock of waders currently residing on Dawlish Warren beach, including 21 Sanderling, 5 Ringed Plovers, 5 Grey/Black-bellied Plovers, 32 Dunlin and a single Little Stint. It is markedly smaller than Dunlin but slightly larger than Little Stint and easily picked out from the Dunlin (with which it feeds and roosts) by its drab, predominantly grey 'winter-type' plumage.

The structure of the bird is characteristic, with an overweighted, chest-heavy body structure and a noticeably thick neck. It has a distinctive white supercilium, petering out just behind the eye, and overall, grey (greyish-brown at very close quarters) upperparts. The lower underparts are completely gleaming white, with an obvious 'bracelet' of small streaks forming a broken 'breast-band'. A very few very light streaks extend on to the fore-flanks on both sides.

The mantle and upperwing coverts are uniformly marked grey, with each feather having a dark shaft-streak and pointed towards the tip. There is no hint of any warmth (rufous/chestnut) in any of the feathers. The crown is a shade darker than the rest of the upperparts, furrowed with darker pigmented and slightly blacker feathers. The ear-covert patch is distinctly darker in shade.

The primaries extend to just beyond the tail tip, whilst the secondaries are very frayed and worn

The all-black bill has a moderately thick base and fine tapered tip and lacks the distinctive 'blob-ended' tip that many Semipalmated Sandpipers appear to show. The legs are dark but slimmer than Dunlins and a tad paler, with partial webbing between the toes (confirmed by John Fortey's images and video).

In flight, a white wing-bar was apparent. Unfortunately, no flight calls were heard''

I received some excellent feedback on the identification of this bird from North America and I would very much like to thank Kevin Karlson, Julian Hough, Erik Johnson amongst others for taking the time to contribute to this very intriguing identification puzzle. I would also like to thank Killian Mullarney for his input, as well as Mashuq Ahmad, Mark Bailey, Dave Stone, Kevin Rylands, John Fortey and Ivan Lakin. I have added Kevin Karlson's comments on my Rare Bird Alert blog.

Once again, thanks to all of you that took the time to get involved - it is very much appreciated - and if you have further comments to make, I am more than happy to hear them.
Kevin Karlson of New Jersey commented (see below). Kevin is an expert author and writer of many papers on North American waders and knows both Semipalmated and Western Sandpiper very well, seeing many large flocks of both species every year.
''Lee, initially, after studying Ivan's images which were difficult to analyze, I put forth an opinion of the bird for a long-billed Semipalmated Sandpiper, whose Eastern Canadian breeding females actually overlap with Western Sandpiper in bill length and shape. Some East Canadian Semiplalmated Sandpipers have finer-tipped bills that droop at the tip more noticeably than small billed male Westerns.
However, the new photos definitely show an undeniable WESTERN SANDPIPER.While plumage is really not definitive between these two nonbreeding species, Western tends to show a cooler gray upperpart shading, like your bird, and a lack of contrast for the crown and nape, which many Semis show. A larger amount of white feathering on the forecrown and lower cheek is also better for nonbreeding Western, with Semi showing less white in both areas, and a typically darker cheek as well. However, the structure of this bird is distinctive for Western , with its overweighted, chest-heavy body structure; thick-necked appearance; and blocky versus small, rounded head shape on Semipalmated. The bill shape is perfect for male Western as well, with a moderately thick base and fine tapered tip, although a bill like this is not out of the question for Semipalmated. The last photo of the bird walking right shows a perfect representation of Western body shape, with overweighted chest, shoulders and neck, unlike the very uniform, balanced body proportions of Semipalmated. These structural differences work throughout the year, and are better field characters to base an ID on nonbreeding birds. I see tens of thousands of Westerns in Texas every spring, and work really hard to find a Semipalmated in April, and then return to NJ and see tens of thousands of Semipalmateds, with Westerns much more difficult to find in spring. However, in August, I might see 500 Westerns at an Atlantic beach near my house, and only find a handful of Semis on this particular migratory beachfront, so I enjoy working with these two species. I rarely see a Western or Semipalmated in real life that I cannot identify by shape and structure. Photos, however, can be misleading, so I am sorry for my previous e-mail supporting Semipalmated. Take my name off that supporting list. This bird is a Western without question''
Posted by Lee G R Evans at 10:45