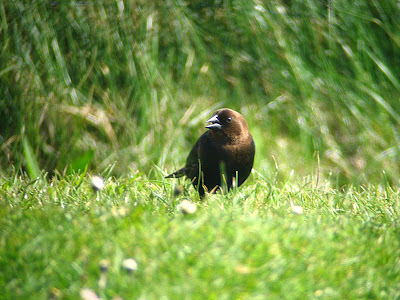 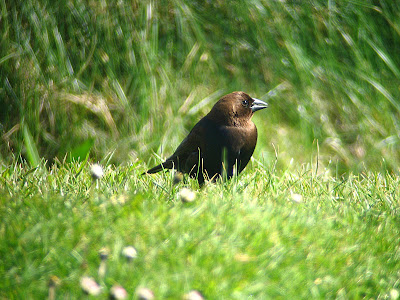 The second BROWN-HEADED COWBIRD for Britain arrived on Fair Isle (Shetland) during a dramatic fall of other Nearctic vagrants (including a SOLITARY SANDPIPER, 2 LAUGHING GULLS and a FRANKLIN'S GULL on Shetland) from 6-8 May 2009. Although the best part of £600 had to be spent in order to connect with this bird, the following 'chequebook birders' secured it on their British Life Lists - Brett Richards (who obtained the four images published above), John Hewitt, Kevin Denny, Malcolm Roxby, John Regan, Steve Gantlett, Neil Alford, Mel Billington, the Invisible Man, Chris Batty, Andrew Holden, Vicky Turner, Malcolm Goodman, Matt Mulvey, Alan Clewes, Paul Chapman, Stuart Piner, Simon King and Dougie Barr. One group of Shetlanders also connected (including Dennis Coutts, Steve Minton and Jason Atkinson), with a total of just 41 observers in total.

The only previous British record was of a first-summer male which associated very closely with cattle at Ardnave Point, Islay (Argyll) from mid afternoon until at least 1815 hours on 24 April 1988. It was feeding on barley/oat seeds and insects, pocking at this food source after a short flight or run, and could be watched dehusking the seeds by rotating them in its bill like a Greenfinch. This unique occurrence was witnessed by just one fortunate observer (Clive McKay) and was fully documented by him in British Birds 87: 284-288.
Posted by Lee G R Evans at 23:37