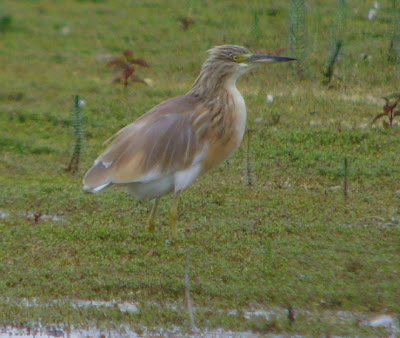 Felixstowe's first-summer SQUACCO HERON relocated to Baker's Fen, Wicken (Cambs) on Sunday and was still showing intermittently today, feeding voraciously on small fish on the main flood (easily viewable from the tarmac track that runs along the western side of the fen, a 20-minute walk from the reserve car park). (see Matthew Dean's superb photograph above)

An adult summer LAUGHING GULL was discovered at Marton Mere LNR, Blackpool (Lancs) mid-morning and performed for a constant stream of admirers until 1800 hours when it flew off west, whilst an adult summer FRANKLIN'S GULL was on the beach at Westing and on the Loch of Snarravoe Unst (Shetland). A further adult LAUGHING GULL visited the island near Meadow Lake Hide at Testwood Lakes HWT, Southampton (Hants), from 1300-1325 hours before flying off south.

The Grove Ferry BLACK-WINGED PRATINCOLE was still present early morning before relocating a few hours later at Elmley Marshes RSPB (Kent), where it favoured the flood visible from Southfleet Hide for some time. Meanwhile, the Swillington Ings COLLARED PRATINCOLE was hawking for insects over St Aidan's Flash western reedbed early morning, with one of yesterday's 3 WHISKERED TERNS still performing over Astley Lake. One of these visited Fairburn Ings RSPB (West Yorks) during the day, with two for much of the day over the Dearne Valley, Wombwell Ings RSPB (South Yorks).

At high tide, the winter-plumaged 'peep' most likely a WESTERN SANDPIPER was with Sanderling and Dunlin on the eastern beach at Dawlish Warren NNR (South Devon) - this bird being first seen on 8 April.

The three wide-ranging EUROPEAN BEE-EATERS that moved between Dorset and Kent yesterday were on wires at the west end of Rye Harbour Long Pits (East Sussex) early morning before flying off strongly east, whilst a COMMON ROSEFINCH was seen briefly at Gun Hill, Burnham Overy Dunes (Norfolk). A HOOPOE was seen briefly at Elmley Marshes RSPB (Kent).

The first MARSH WARBLERS are starting to turn up, with singing males at Kilnsea (in Beacon Lane) (East Yorks) and another at Hatch Pond LNR, Poole (Dorset), whilst the long-staying SAVI'S WARBLER is still reeling from the reedbed on the west side of 70 Acres Lake (Herts/Essex).

It has been an exceptional spring for EURASIAN SPOONBILLS with good numbers scattered around the country. Today, two were at Druridge Pools (Northumberland), 5 at Inner Marsh Farm RSPB (Cheshire), 4 at Elmley Marshes RSPB (North Kent), 3 on the North Marsh at North Warren RSPB, Aldeburgh (Suffolk), 2 on Parkgate Marsh (Cheshire), 2 at Llanelli WWT (Carmarthenshire), 1 at Slimbridge WWT (Gloucs), 1 at Goldcliff Lagoons (Gwent) and an adult at Kinneil Lagoon, Grangemouth (Forth). The GREAT WHITE EGRET continues at Saltholme Pools RSPB (Cleveland) whilst a late CATTLE EGRET was on the Pevensey Levels (East Sussex) for a second day.