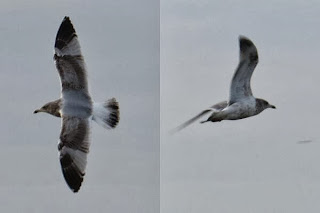 This very interesting gull was photographed at Marine Lake this afternoon by Avon birder Paul Bowyer. In every aspect, it seems to resemble a 2nd or 3rd winter NORTH AMERICAN HERRING GULL, with its heavy blotching on the underparts, extensively streaked head and tail pattern.

Dear Lee/All,
While I don't doubt that we could find a few Smiths that look essentially like this bird, I feel that it would be tough to call it one from a vagrant European standpoint.  The first step is to attempt to age it.  I say attempt, as ringing/banding recoveries in the UK (at least) have shown that 3C birds can look virtually identical to 2C and 4C (a well-known case from UK where 3 ringed siblings in their 4CY appeared like 3 different ages!)
However all we can do is look at the features and come up with our best evaluation.  The adult-like inner primaries (incl. P5 with strong white tip) and most of the secondaries, and obvious mirror of P10 strongly suggest that this is a 3CY.

Reading the text on this page:
http://gull-research.org/smithsonianus/3cyoct.html - Lonergan & Mullarney's Smith's ID article at the GRO website

- I find almost no features indicative of smith over argen(tatus/teus)... The only one would be the heavy dark markings on the head, chest, and neck.  But other features are more indicative of argen, such as:
- no sign of dark marks in the adult-like secondaries
- dark markings in the tail rather diffuse and/or vermiculated
- underside of outer Ps do not seem to show any pale tongues

So unless the ID features have been refined since the publication of Lonergan and Mullarney 2004, I don't see how this bird could be called a Smithsonian's  from these images.