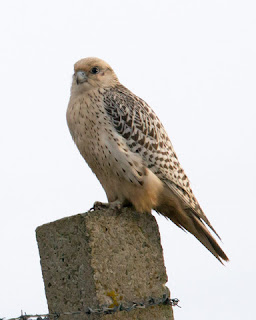 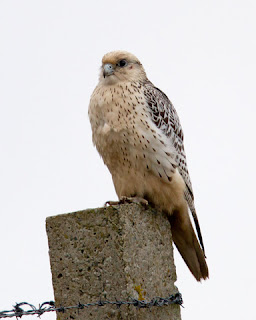 It now transpires that the female-type immature PINE GROSBEAK currently residing in SHETLAND has been present in the vicinity since at least 2 November 2012 - coinciding with the large numbers that reached southern Scandinavia at the time. The bird is showing very well today in the garden of 'Saltoo' just north of the pier at North Collafirth, Northmavine - often affording views down to a few yards. I am planning a trip for this week with one space in the car - email me at LGREUK400@aol.com if you would like to come.


Not much else on Shetland at the moment other than a first-winter RING-BILLED GULL and a few Iceland Gulls at East Voe of Scalloway (HU 407 396).

Elsewhere in Scotland, the female DESERT WHEATEAR continues to make headlines - now completing its 64th day on site on the duneslack by the lighthouse at Rattray Head (Aberdeenshire). An adult drake SURF SCOTER on Loch Ryan, Stranraer (Galloway) is an excellent record, the bird consorting with the huge Greater Scaup raft off of The Wig on the west side. Further south, there was no sign of the Holy Island (Northumberland) Cattle Egret today.

Although erratic in its appearances, the adult winter BONAPARTE'S GULL spent all day today at Princes Park Lake, Eastbourne (East Sussex), often showing down to just a few yards as it came in for bread with Black-headed Gulls. The adult was also still present on the Ogmore Estuary, Bridgend (West Glamorgan), frequenting the island just upstream of Portobello House. A first-winter was also identified on the Outer Hebrides yesterday at Stoneybridge on South Uist.

On the South Coast, the only overwintering HOOPOE was performing today on lawns in Hamworthy village, Poole (Dorset), generally in the Dawkins Road and Freshwater Drive areas, whilst the PALLAS'S LEAF WARBLER was still frequenting the River Blackwater on the county boundary between Berkshire and Hampshire at Moor Green Lakes NR..

The 3 TUNDRA BEAN GEESE remain at Slimbridge WWT (Gloucs) (back again on the Dumbles and visible from the Holden Tower) as do the 6 in Suffolk once more in fields between Westleton and Dunwich and 4 on Southwold Town Marshes, whilst the last 28 TAIGA BEAN GEESE remain in the Yare Valley, commuting between Cantley and Buckenham Carrs. One of the recent six RED-BREASTED GEESE in Suffolk was at Sudbourne Marshes with Dark-bellied Brent Geese this morning

It has been an excellent winter for RING-NECKED DUCKS with a drake still on Helston Loe Pool (Cornwall), 3 immatures still on Scilly, two different immatures at Slapton Ley (South Devon), a female at Siblyback Lake (Cornwall), an adult drake at Hawkridge Reservoir, Spaxton (Somerset), a first-winter drake at Marloes Mere (Pembs) and a drake on Tophill Low 'D' Reservoir (East Yorks), whilst a cracking drake FERRUGINOUS DUCK remains with Northern Pochards at the east end of Priory Country Park, Bedford (Beds). A drake LESSER SCAUP was present for a second day today at Shotton Pools (Clwyd), north of the A548 on 'Cop Hole' at SJ 298 722, whilst the recent Blagdon bird relocated to Cardiff Bay Wetlands Reserve in South Wales.

The LESSER YELLOWLEGS is still to be found in the Ernesettle Creek by the Tamar (South Devon), generally in the area between the blue boat and the upturned barge 600 yards east of the bridge, with the first-year LONG-BILLED DOWITCHER on the Gann Estuary at Dale (Pembrokeshire). There seems to be at least 4 wintering WHIMBRELS this winter, with singles in Clyde, Kent, West Sussex and Cornwall

A juvenile white morph GYRFALCON afforded some fabulous views as it roosted on a post close to the road not far north out of Stromness (Orkney) (see Morris Rendall's exceptional shots above) from 1-2 February whilst Norfolk suddenly produced a scattering of ROUGH-LEGGED BUZZARD sightings with 2 at Haddiscoe Levels, one at Hickling Church, an adult at Burnham Overy Marshes and a juvenile near Heath Farm on the Hempstead Marshes.

The family party of 7 COMMON CRANES are still to be seen distantly from the Watchpoint along Harty Ferry road, Sheppey (Kent), with the adult on Walland Marsh (Kent)

A first-winter RING-BILLED GULL has been showing very well on the canal in Bude (Cornwall), with other regular birds in Dingwall (Highland) and on Walpole Boating Lake, Gosport (Hants).

The male BLACK-BELLIED DIPPER is still performing well on the River Thet just east of the Three Nuns Bridges in Thetford (Norfolk), this same site also yielding up to 3 OTTERS on a regular basis.

The only wintering YELLOW-BROWED WARBLER of 2013 is that at Gwennap Sewage Works near Redruth (Cornwall) whilst no less than 75 SIBERIAN CHIFFCHAFFS are wintering. The somewhat scruffy first-winter ROSE-COLOURED STARLING continues to frequent the first Hawthorn on the right as you enter Milbury Lane in Exminster Village (South Devon)

In IRELAND, a RICHARD'S PIPIT is present for a second day at Cooley Point (County Louth), with an adult LONG-BILLED DOWITCHER at Lady's Island Lake (Co. Wexford), the CATTLE EGRET at the organic piggery at St Johnston (Co. Donegal), the AMERICAN COOT at Murloch (Co. Galway) and 5 COMMON CRANES and juvenile female NORTHERN HARRIER in the Tacumshin Area (Co. Wexford). Rare wildfowl include drake Green-winged Teals at Ballyquintiin Point (Co. Down) and at Murloch, with the drake LESSER SCAUP near the Information Centre pier at Oxford Island NNR (Co. Armagh).. It is an excellent winter for RING-BILLED GULLS with 3 adults at Nimmo's Pier Slipway, Galway harbour (Co. Galway), 2 at Cuskinney Marsh (Co. Cork), 2 at Tralee Bay Wetlands NR and singles at Wexford Town Centre (Co. Wexford)