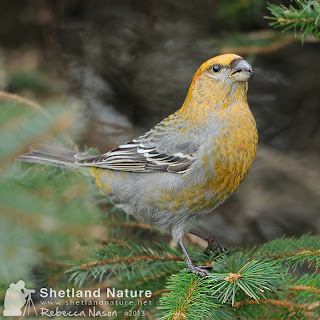 A first-winter male PINE GROSBEAK is still present today in the North Collafirth and Housetter areas of Shetland North Mainland, after first being photographed in Urafirth on 2 November 2012. It seems set to stay for some time and has thus far been successfully twitched by over 100 birders. I visited the site on Thursday 7 February along with 21 others but despite searching all 9 plantations/gardens incessantly for hours on end, the bird was nowhere to be found. Then, at 1530 hours, it suddenly appeared in a narrow belt of pines opposite the Greenbrae entrance, allowing Deryk Shaw time to get a few photographs before he raced off to alert the rest of us searching elsewhere. It disappeared almost immediately but was relocated over a mile north in the garden of 'Saltoo', just NE of the pier at North Collafirth. This seems to be its favourite feeding place where it showed extremely well until dusk - presumably its roosting site each night. It seems to feed voraciously throughout the day on the Spruce needles and seeds and calls quite frequently.

It has visited 9 different plantations/gardens during the past week including that at Saltoo and three gardens across the hill from here in Housetter. It has also visited the plantation at Hill of Skea, the large plantation at Greenbrae and the equally large plantation at North Collafirth, both sites immediately east of the A970. It is highly mobile and thinks nothing of moving over a mile in one flight. If all else fails, wait for it to come into roost at Saltoo.

It takes just 45 minutes to drive from the Lerwick ferry terminal to North Collafirth. The ferry leaves Aberdeen each evening between 1700 and 1900 hours and arrives in Lerwick at about 0700 hours each morning (weather conditions allowing). It costs just £52 return plus £67 for a cabin and has the best fish & chips in the region priced £8.95. Car Hire in Lerwick ranges from £31.80 to £46 per day, depending on size of car - a litre of fuel working out at £1.47.