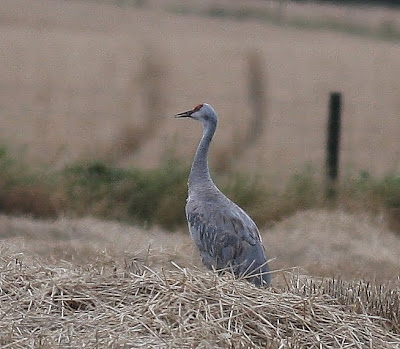 An apparent adult SANDHILL CRANE (see Joseph Nichols superb shot above), perhaps the bird of Orkney of two Septembers ago, appeared in front of two photographer's eyes today at around 1500 hours - distantly from the Starnafin Centre hide at Loch of Strathbeg RSPB (Aberdeenshire) at the Low Ground. Interestingly, its arrival coincided with the first real push of Pink-footed Geese this autumn, involving several thousand birds.

Warden Dominic Funnell was quick to hear of the sighting and relocated the bird after a lot of effort. Once the identification had been established, Dominic 'phoned Birdline Scotland (07968 700234) and immediately news of the bird was broadcast.

The bird remained at Savoch Low Grounds for about 45 minutes before it flew off low into fields around the village of St Combs and Cairnbulg - where it was still present until at least 1915 hours, presumably settling down for an overnight roost. Both locals Pauline Johnson and Ken Jack managed to obtain some decent images of the bird and these can be viewed on the official RSPB Strathbeg blogsite

Meanwhile, on Shetland South Mainland, a confiding SWAINSON'S THRUSH remains for a second day in gardens of the Dalsetter Croft - presumably another bird displaced by the recent deep Atlantic depressions.

On North Ronaldsay (Orkney), whilst there is no sign of the sub-adult Lesser Kestrel which sheltered on Tuesday and Wednesday on the island today, two NORTH AMERICAN BUFF-BELLIED PIPITS were discovered - both feeding together this afternoon (per Paul Brown), whilst two first-winter CITRINE WAGTAILS remain.

Furthermore, two entripid Barra (Outer Hebrides) autumn regulars discovered a RED-EYED VIREO today in Creachan - the second of this species to be found in Britain this autumn - whilst in Argyll, a BLYTH'S REED WARBLER continues on Tiree......
Posted by Lee G R Evans at 19:55