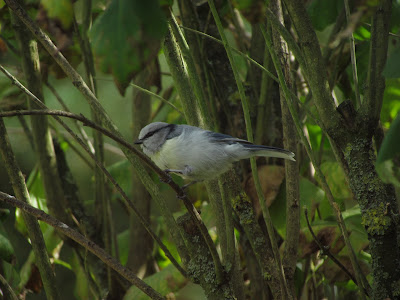 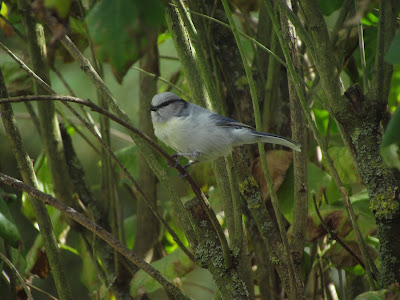 An Azure Tit of presumably captive origin has been visiting a garden peanut feeder in Naphill hamlet, north of High Wycombe (Bucks) for three weeks now. The bird with its prominent yellow underparts, dusky cap and thick dark lores is sadly of the eastern form (flavipectus), often known as Yellow-breasted Tit, and considered by some authorities to be a separate species to Azure Tit. This form is very restricted in range, breeding in the Western Tien Shan and in northern Afghanistan and Pakistan, and is surprisingly common in captivity, even breeding successfully, especially on the near Continent.

I have attached a few of Adrian Kettle's images above on the website - taken today as it visited the feeder about once every 40 minutes.
Posted by Lee G R Evans at 21:41