LEAST SANDPIPER in KERRY - an interesting individual (by CIARAN CRONIN) 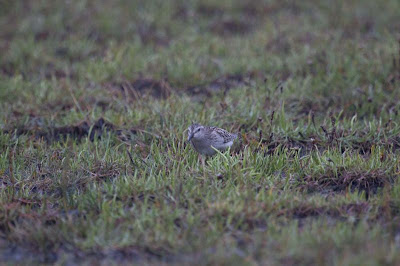 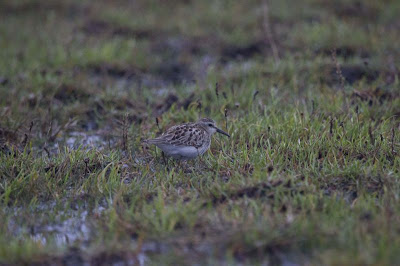 I need to learn a bit more about these guys, and have no experience of either lLEAST SANDPIPER or LONG-TOED STINT. While I'm pretty happy with the identification as a LEAST SANDPIPER, I'd like to raise a couple of points out of interest.
1) The bird shows very clearly that the dark crown extends to the bill base,breaking the supercilium - supposedly a feature for Long toed.

3) The call, heard a number of times this morning was clearly a monosyllabic sound, which I rendered as 'prit' - not similar to other descriptions read.

4) In flight there appeared to be a hint of toes projecting beyond tail, although this was very difficult to be sure of - if present a feature for Long toed.

The bill is clearly solidly dark, including base of lower mandible - a LEAST feature. The shape did not remind me of Wood Sandpiper, rather a small furtive Temminck's Stint, and the tibiae did not seem particularly long.

On balance, I'm quite happy that the bird is indeed a Least Sandpiper, particularly on shape, leg length and bill colour. An absolutely superb find, and a truly fantastic bird. However, I thought it worthwhile raising these features so I can be educated, and just as a reminder that the features may not be as consistent as we would like, and the books might suggest!

Might have some better shots later when I learn how to use my camera - dashing out the door now into a lovely, wonderfully misty Galley Head!!!