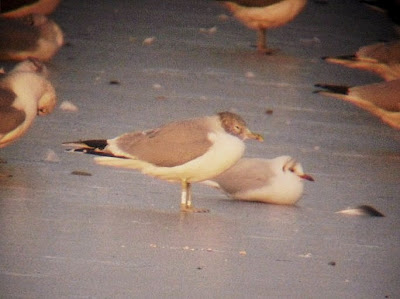 I was checking through the many hundreds of Gulls roosting on the frozen pool at Seaforth NR in Lancashire this evening when my eye caught something interesting. In the midst of the tightly packed roost I could see what appeared to be a hooded, dark-mantled Gull. Its bill was tucked into its mantle and I couldn`t see its legs or primaries. The alarm bells began to ring, but further observation solved the puzzle. It awoke and walked out of the flock, it was an adult COMMON GULL, but with a blackish "hood" made up of dense black markings. I`ve seen very heavily marked Common gulls on numerous occasions before but never anything like this. The bill and leg colour appeared normal. When it wing stretched however, it showed some white between the grey inner primaries and the black tips, remarkably similar to Franklins Gull. Interestingly it was carrying a Norwegian `darvic` ring, as quite a few of the Common gulls do here in winter. It was ringed in Tromso on 13th May 2004.
I was lucky enough to see this bird at 150m range, albeit in fog and fading light, but what would an observer make of this bird if it was seen at a great range, such as on an inland resevoir roost? Could this bird in fact be the reported Laughing Gull recently reported from Derbyshire?