Aberdeen WAXWINGS getting around 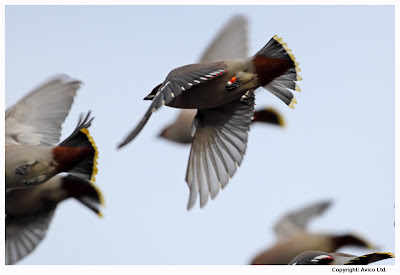 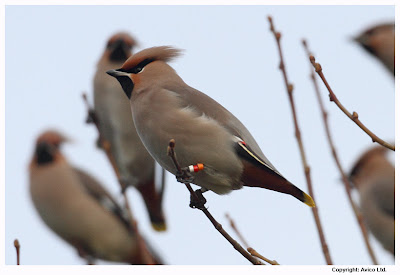 Paul Keene photographed this first-winter male BOHEMIAN WAXWING in Leighton Street, Woburn (Bedfordshire), on 2nd December, where it remained with up to 104 others until 5th. I saw this same colour-ringed bird in Linslade on 11th December and after writing to Raymond Duncan, the Waxwing co-ordinator and member of the Grampian Ringing Group, I found out that the bird had been trapped and ringed at Kincorth in Aberdeenshire on 2nd November 2010.
Ray informed me that other Kincorth colour-ringed Waxwings had been reported in December in Cleveland, Lancashire, Cheshire, Worcestershire, Nottinghamshire and Salop, proving how far these flocks continue to disperse in their search of food. They finally arrived in my village on Sunday.
Posted by Lee G R Evans at 11:42