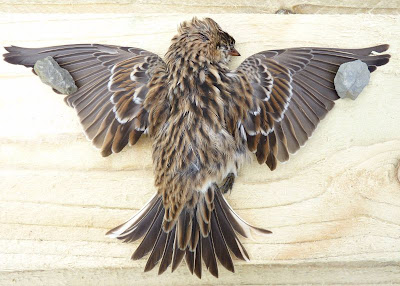 This was one of at least 70 Lapland Buntings that arrived on the Brough of Birsay, NW Orkney, this week, picked up dead by Phil Barnett and photographed by Paul Higson. Biometrics certainly suggested a first-year female from Greenland, with a wing length of 92.
An unprecedented arrival of LAPLAND BUNTINGS (for August and early September) is currently taking place with huge numbers arriving in Iceland and in the Northern Isles of Scotland. The highest count so far is that of over 180 birds on Fair Isle but many sites are now into treble figures and the total number displaced must be in the many thousands.

The arrival of these birds followed a very deep Atlantic depression that tracked over Greenland last week and this may have had some influence over their displacement. It is likely that they are of West and East Greenland origin but the separation of this form is highly marginal and in reality, Lapland Buntings are most likely a clinal species, like several Northwestern Redpoll types. The reason for this irruption is not fully understood but may relate to a bumper breeding season following a late spring arrival. Generally speaking, tundra nesting species are having a hard time, with yet another Lemming failure year affecting the feeding activities of predators such as Foxes, Long-tailed Skuas and Northern Herring and Great Black-backed Gulls, with baby birds (particularly waders) being targeted. However, conversely Voles were particularly numerous this summer in the taiga forests, so perhaps any damage will be limited.

It is expected that many of these Lapland Buntings will migrate further south, so locations such as Spurn Point, Gibraltar Point, Blakeney Point and Landguard Point may well see some impressive passage numbers. I expect Scilly will also receive some exceptional numbers.
Posted by Lee G R Evans at 20:03