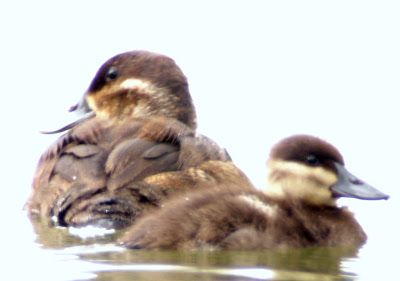 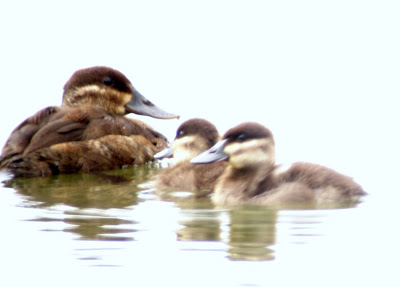 I should just like to take the opportunity to thank the large number of you that have written in support of my campaign to ensure the safety of the Ruddy Duck - it is very greatly appreciated. It is very heartwarming to know that so many of you are fully against the ongoing cull being undertaken by Defra (or Fera as it is now known) and I am particularly grateful for all of the records that you continue to supply me of this species.

As most of you know, I was incensed to hear of Defra's plans to extend the murdering until 31 March 2011 and was even more incensed when Defra's insider spies got to hear of one family of Ruddy Ducks in the first week of August and immediately sent in a hit squad. This particular site was used as a nursery by over 350 water birds, including Gadwall, Tufted Duck, Northern Pochards, Little Grebe and Common Tern, and on 3 August, the entire population was forced to endure five hours of attempted killing. This follows on from previous killings and untold disturbance at both the breeding and wintering sites of a Schedule One breeding species - the Black-necked Grebe. To this day, the RSPB continue to support this cull and have had the disgrace to allow a single cull on one of their reserves - the popular Dungeness RSPB reserve.

The eradication programme is implemented and financed by EU-Life Nature Unit and Defra, who claim that no extra finance is being used in the extension and falls within the original budget of £5.4 million pounds. There is no denying their success, as at the start of the campaign in 1998, my assessment of the UK population was of 6,322-7,300 birds. They have slaughtered many thousands of birds in the 12 years that have passed, so much so that the population is now a paltry 200 birds.

A total of 738 Ruddy Ducks were killed at 37 locations between 1 April 2009 and 30 June 2010 (note how Defra shamelessly kill during the breeding season of our other waterbirds) but the extreme weather Britain experienced this last winter meant that Ruddy Ducks were a sitting target at the few large reservoirs remaining unfrozen and a further 174 were killed (incidentally, proving that British Ruddy Ducks prefer to winter at Traditional sites rather than emigrate to Spain).

I know of only 2 Ruddy Duck records in Spain since January 2009 and there have been no hybrid records for a number of years now. Two Ruddy Ducks of presumably North American origin made landfall on The Azores at the same time as many other Nearctic species last October continuing evidence of natural arrival of vagrants. Conversely, the population of the White-headed Duck continues to thrive, with better protection afforded to both the breeding and wintering sites of the species, with an estimated 4,000 or so individuals in Spain, Portugal, Tunisia and Morocco this summer. Northward post-breeding dispersal by this species is also still taking place. The numbers of White-headed Ducks in Asia has also remained stable.

Please continue to send me all of your Ruddy Duck records and images so that they can be entered into the database (Lee G R Evans)
Posted by Lee G R Evans at 18:01