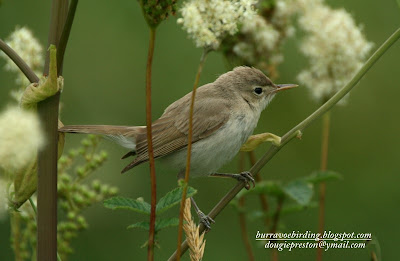 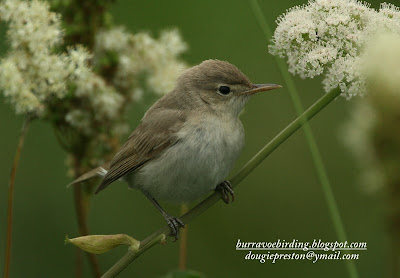 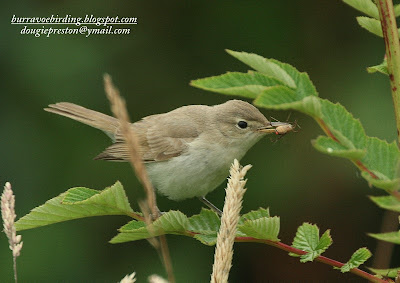 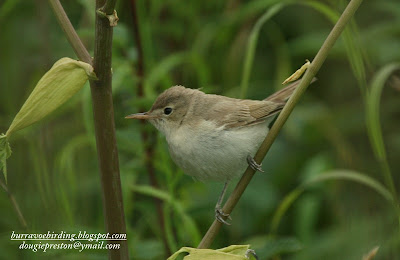 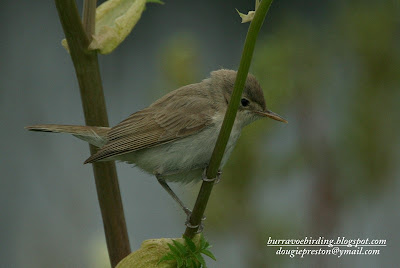 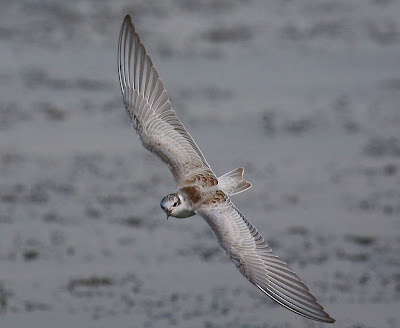 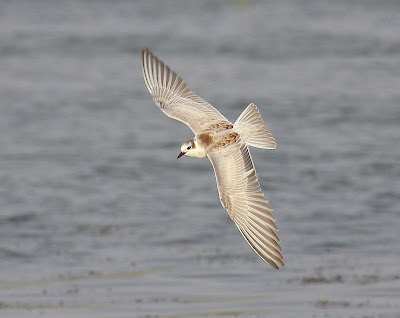 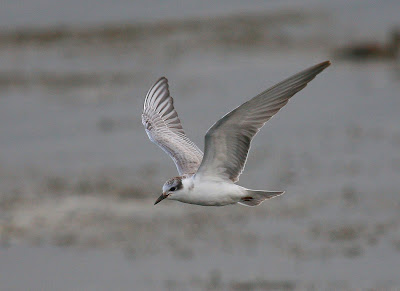 There were two different SYKES'S BOOTED WARBLERS discovered this week - that superbly photographed by Dougie Preston on Unst (top 5 images) and that at Druridge Bay (Northumberland) (lower two images taken by James Hanlon)
Cleveland's WHISKERED TERN too still remains - Stephen Clifton capturing even better images than he did on a previous visit.

After putting on a good show for most of the week, the adult male LESSER GREY SHRIKE was nowhere to be found today in the Kelling Hard vicinity of North Norfolk, denying many an opportunity to see this handsome eastern vagrant this coming weekend. In fact, the region had little to offer today, other than the long-staying adult COMMON CRANE at Cley and a scattering of passage waders, including juvenile Little Stints and both Curlew and Wood Sandpiper.

The record-breaking juvenile WHISKERED TERN continues to linger in Cleveland at Saltholme Pools RSPB, whilst a juvenile WHITE-WINGED BLACK TERN spent a second day at Hickling Broad (Norfolk). A wave of predominantly juvenile BLACK TERNS also swept across the southern half of Britain this afternoon.

In North Lincolnshire, a worn adult 'peep' indicative of SEMIPALMATED SANDPIPER continues at Alkborough Flats, being seen several times today but mainly at long range, whilst two PECTORAL SANDPIPERS arrived at the scrape at Low Newton (Northumberland) this afternoon. Large numbers of WOOD SANDPIPERS were also scattered around today, along with the first thrust of juvenile LITTLE STINTS and juvenile SPOTTED REDSHANKS.

SPOTTED CRAKES on offer include the showy bird at Shibdon Pond, Blaydon (County Durham) (favouring the muddy bay in the NE corner) and the 1-2 at Grove Ferry NNR (Kent) (from the David Feast Hide).

At Dungeness (Kent), an adult PURPLE HERON remains on Denge Marsh, along with the CATTLE EGRET and GREAT WHITE EGRET, with a further juvenile CATTLE EGRET still in Essex and roosting this evening at Wat Tyler Country Park.

Drift migrants such as BARRED WARBLER have been appearing since last weekend, with two on the Farne Islands (Northumberland) and another on North Ronaldsay (Orkney), with a juvenile RED-BACKED SHRIKE at Saltburn (Cleveland) with the only WRYNECK today at Beacon Lane, Kilnsea (East Yorks). Generally speaking, there has been a major arrival inland of Common Redstart, Whinchat and Spotted Flycatcher, spiced up by the occasional Pied Flycatcher and Wood Warbler.

After the SYKES'S BOOTED WARBLER on Unst (Shetland) earlier in the week (see Dougie Preston's outstanding images above), Scotland has quietened down since, with the 4 adult drake SURF SCOTERS off Blackdog Beach (Aberdeenshire) and the COMMON CRANE at Montrose Basin (Angus/Dundee) highlighting today, as well as the continuing PECTORAL SANDPIPER on Carden Flood at Vane Farm RSPB (Perth & Kinross).and the eclipse drake RING-NECKED DUCK there.

GREAT SHEARWATER passage has also been experienced in West Cornwall today with 1-3 seen (Porthgwarra and Lizard Point) and another 2 off Start Point (South Devon).