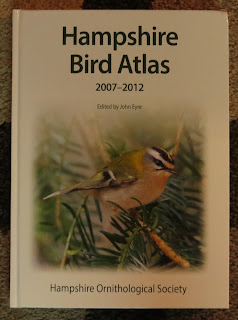 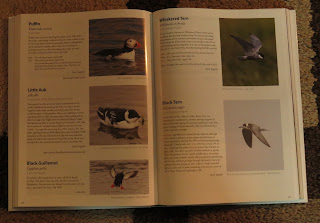 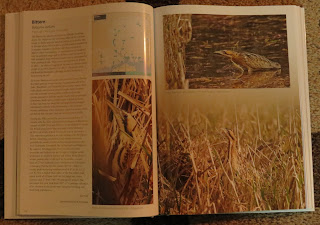 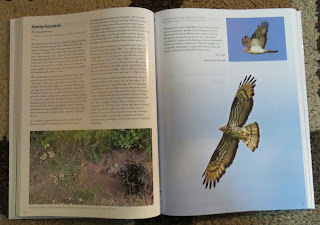 The Hampshire Bird Atlas 2007-2012
Edited by John Eyre
Well what can I say?! This publication is exceptional, magnificent, essential, sumptuous - absolutely brilliant! Just finished reading it from cover to cover and it is stupendous - the best Bird Atlas in Britain ever produced. The layout, text format and image reproduction is second-to-none and the Firecrest front cover portrait is not only poignant, considering Hampshire holds over 50% of the UK's singing males at 415+ birds, but stunningly beautiful and a brilliant choice - Wildguides must really be congratulated at doing such a wonderful job on production and design - I really must get them to do my next tome!
The book itself is a culmination of the work of over 1,200 volunteers in surveying individual tetrads in Hampshire in both the winter and summer periods between 2007 and 2012. The results are staggering and very much in line with those of what I have found in my own work in Buckinghamshire. A lot of plusses and minuses but overall a declining trend, with a marked decline in 51 species (Bewick's Swan, Russian White-fronted Goose, Common Eider, Smew, Ruddy Duck, Quail, Little Grebe, Hen Harrier, Montagu's Harrier, Sparrowhawk, Spotted Crake, Stone Curlew, Lapwing, Curlew, Ruff, Sanderling, Common Snipe, Woodcock, Collared Dove, Turtle Dove, Common Cuckoo, Little Owl, Long-eared Owl, Common Swift, Lesser Spotted Woodpecker, Merlin, Rook, Willow Tit, Marsh Tit, Skylark, House Martin, Wood Warbler, Tree Pipit, Willow Warbler, Garden Warbler, Lesser Whitethroat, Common Starling, Spotted Flycatcher, Common Nightingale,Whinchat, Northern Wheatear, House Sparrow, Tree Sparrow, Yellow Wagtail, Bullfinch, Greenfinch, Linnet, Yellowhammer, Reed Bunting and Corn Bunting) and a general increase in 28 species (Egyptian Goose, Barnacle Goose, Dark-bellied Brent Goose, Tufted Duck, Sinensis Cormorant, Bittern, Great White Egret, Little Egret, Glossy Ibis, Great Crested Grebe, Red Kite, Goshawk, Common Buzzard, Osprey, Avocet, Icelandic Black-tailed Godwit, Mediterranean Gull, Lesser Black-backed & Great Black-backed Gulls, Yellow-legged Gull, Peregrine, Common Raven, Firecrest, Woodlark, Cetti's Warbler, Blackcap, Goldfinch and Siskin). In fact, the Atlas work shows that for some county species, the decline is nothing short of catastrophic, particularly for Grey Partridge, European Turtle Dove, Lesser Spotted Woodpecker, Willow Tit, Willow Warbler and Tree Sparrow - all species now on the verge of extinction in the county. The big plusses, notwithstanding those non-naturalised species such as Egyptian Goose, are the increases in Dark-bellied Brent Geese (14,000 wintering, internationally important), Red Kite, Goshawk (an incredible 24 breeding pairs in the review period), Mediterranean Gull (520 breeding pairs and rising), Peregrine, Common Raven and Firecrest.
Not content with just being an atlas, the publication also doubles-up as a comprehensive bird report over the period, with many records of rarities included & detailed, along with top-class photographs of those individual entries, including Surf Scoter, Cattle Egret, Black Stork, White-tailed Sea Eagle, Black-winged Stilt, Kentish Plover, Spotted Sandpiper, Blue-cheeked Bee-eater, Dark-eyed Junco, Little Bunting and White-throated Sparrow for example. I just love the layout of the book - just turn to the Brent Geese on page 63 as an example - highly professional and really relaxing on the eye. The graphs are of a very high standard and quality and easy-to-understand and assimilate, as are the maps highlighting distribution and changes in that.
And the standard of photography used is just sumptuous - just take a browse of Martin Bennett's Dartford Warbler (page 47) and Honey Buzzards (page 135). Incredible! And talking of the latter, interesting to see that Hampshire recorded Honey Buzzards in 65 tetrads in the period, with breeding proven in 19 - by far the most productive county in Britain for the species.
Towards the end of its 450 pages, a rarity summary appears on page 427 and all those 'escapes' recorded on pages 428-431. This really is a publication to be very proud of - an essential purchase. Just don't miss out!