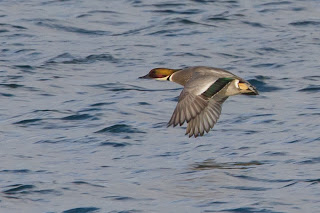 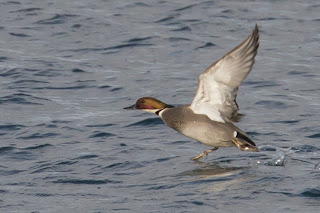 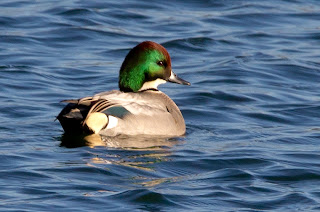 
Following the hysteria of the weekend, today was back to normal with a visit to Oxfordshire.....

A drake FALCATED DUCK had been discovered yesterday and was still present today. Joan, Mike Campbell, Bill Pegrum and I arrived late morning to find it still performing - showing reasonably well along the north shore of Farmoor 1. The bird is unringed and surprisingly wary, swimming away from the shore at speed at 130 yards range, before any of the Mallards it seems to be associating with (incidentally, of which, there has been a huge Continental influx of in the past month, perhaps due to many small lakes freezing over in the Low Countries and beyond). It is an ADULT drake and perhaps a returning bird, maybe that which wintered in South Devon.

Two different SLAVONIAN GREBES were still present on the reservoir, as well as 3 GREATER SCAUPS, one of which was an odd-plumaged juvenile.