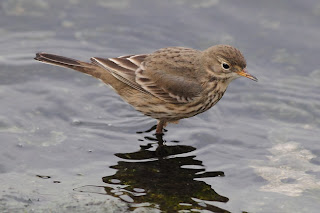 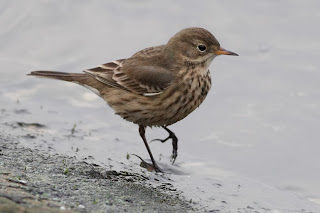 Mike McKee photographed a very odd pipit at Queen Mother Reservoir (Berkshire) late yesterday afternoon and after relocating this morning, realised it was an AMERICAN BUFF-BELLIED PIPIT - a first record for the County (and for the London Recording Area which the reservoir also comes within).

The reservoir is strictly permit access - restricted to members of the Reading Ornithological Group. However, on-site day permits of £2.00 are available to non-members

Both the long-staying RED-NECKED GREBE and LONG-TAILED DUCK are still present on the reservoir too.

In Suffolk, despite being traumatised by a local Sparrowhawk yesterday afternoon, the first-winter HORNEMANN'S ARCTIC REDPOLL remains today, showing well on the shingle beach about 200 yards north of the Martello Tower at the very south end of Aldeburgh. Not that far away, at Minsmere RSPB, a juvenile drake SURF SCOTER was discovered mid-afternoon and drifted slowly north towards Dunwich Cliffs - a mega record for the county. Tundra Bean Geese include parties of 5 at Westleton and North Warren RSPB, Aldeburgh,

The GREAT WHITE EGRET is also still present, frequenting the NW arm of Alton Water - accessed from Lemon's Hill Bridge just off of the A137.

In neighbouring Norfolk, the regular returning female RING-NECKED DUCK was still on Whitlingham Great Broad, Norwich, whilst a BLACK-BELLIED DIPPER (the Thetford bird perhaps?) was at the Nar Millhouse in Narborough. An impressive 54 COMMON CRANES is in Broadland, roosting together in the reedbed north of Horsey Mill.

In Cambridgeshire, the two juvenile PENDULINE TITS were seen again briefly on Ouse Fen - accessed from Long Drove at TL 370 713.

The adult drake FALCATED DUCK was again with Mallards on the north bank of Farmoor 1 Reservoir (Oxfordshire) today, as well as both Slavonian Grebes and 3 juvenile Greater Scaups.

In Bedfordshire, a GREY PHALAROPE remains for a second day on the third pan at Dunstable Sewage Works. The site is strictly permit access only.

In Northeast Scotland, the female DESERT WHEATEAR continues at rattray Head (Aberdeenshire), frequenting the beach in front of the lighthouse

The juvenile BLACK-THROATED DIVER remains on the New Diggings Pit (the one opposite the ARC) at Dungeness RSPB (Kent), whilst inland Great Northern Divers can be found at eight localities.Carsington Water (Derbyshire) harbours both Great Northern Diver and Slavonian Grebe, whilst the Slavonian remains at Priory Country Park (Beds).

In Hampshire, both the GLOSSY IBIS and GREAT WHITE EGRET remain on the floodmeadows south of Ringwood.

In the South West of England, the adult winter PACIFIC DIVER is back to its normal routine, fishing offshore between Marazion Beach car park and Longrock car parks (West Cornwall), the drake LESSER SCAUP and Great Northern Diver are still on Siblyback Reservoir and the exceptionally late RED-BREASTED FLYCATCHER is still at Nanquidno Valley.

In South Devon, a first-winter ROSE-COLOURED STARLING is in gardens by Exminster Churchyard for a second day, the female RING-NECKED DUCK is at Slapton Ley, whilst in Somerset, a drake FERRUGINOUS DUCK is present for a third day north of the Bessom Bridge at Wimbleball Reservoir.
Posted by Lee G R Evans at 20:57