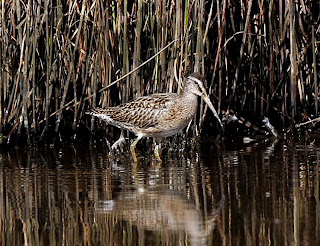 Ace Dorset photographer PETE COE took shot after shot this afternoon in the sunshine and this was one of his impressive results. At just 70 yards range, this juvenile SHORT-BILLED DOWITCHER at Lodmoor really performed. In fact, we had it like this for the best part of half an hour and it was a real educational opportunity. This is a really difficult individual being somewhat similar to numerous juvenile Long-billed Dowitchers we have had in Britain of late. Of course, the early date of arrival should park alarm bells, but apart from the strongly barred tertials, internal covert markings and strikingly broad eye-stripe, there is not that much to go on. At first glance it seems surprisingly long-billed but when up close and personal, and alongside Common Snipe, it seems proportionately shorter. Also, the peachy underparts normally associated with juvenile SBD seem to be lacking, with grey shading to the head, neck and upper mantle contrasting strongly with the rest of the upperparts. Very white at the rear end though, and marginally wider white barring than black, and very black on the crown. A number of observers heard it calling too - the call being transcribed as a double or triple note and quite different to the normal call of Long-billed. Full marks must go to PIM WOLF, who had the instinct to realise this was interesting and quickly contacted Nick Hopper to inform him.