''Not so'' Iberian Chiffchaffs in West Sussex and Cambs 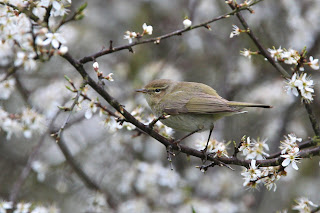 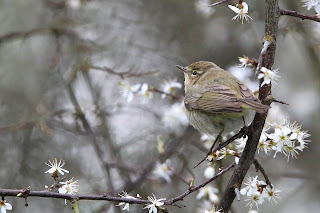 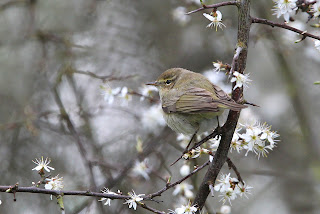 Stuart Elsom obtained these excellent shots of the bird above and had already queried its identification locally.

I took the trouble to visit Castor Hanglands this morning and eventually traversed the wood and found myself in the right place. Forgive me if there has already been intense discussion on this bird on the forum but after four days without proper internet access, I am now able to post again.

I must admit to being very disappointed with the appearance of the bird but was incredibly perplexed by its repertoire. For most of the morning it sang 'perfect' note for note Iberian Chiffchaff song and then, from late morning, changed to perfectly normal and typical Common Chiffchaff song before changing to a mixed song. Like the Apuldram (West Sussex) bird, things were not quite right.

However, appearance-wise, much like the Apuldram individual, this was a non-starter for Iberian, being particularly drab, short-winged and with largely dark bare part colouration. For me, fairly typical Common Chiffchaff appearance and nothing there to suggest Iberian.

I have subsequently discussed this conundrum with a number of experienced observers and commentators and it seems that this spring's topsy-turvy weather in Iberia has held up large numbers of migrants, including chiffchaffs, and perhaps a percentage have been spending a lot of time in the company of genuine Iberians in NW Spain before migrating on further north to Britain.

Most concerning though is the Castor Hanglands ability to sing both Iberian and Common Chiffchaff songs perfectly and if submitted on vocalisation alone, there would be no doubt on sonogram evidence that this is an Iberian. Over the years, I have seen a lot of these mixed singers but never one as convincing as this. This is very vexing indeed