The STEJNEGER'S SCOTER twitch on Saturday 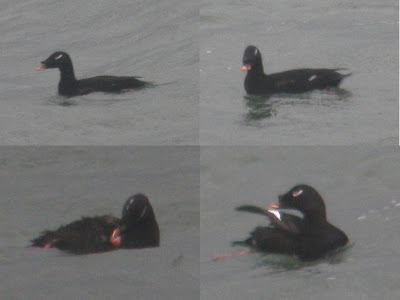 On Saturday, a contingent of 59 British birders joined upwards of 20 Irish birders at Rossbeigh (Ross Behy) SW of Killorglin in County Kerry. After being welcomed at the airport by a very charming and outstandingly helpful Ed Carty, Rossbeigh was just 35-minutes drive away for the majority of us that had opted to jet in from Britain.

Davy Farrar's favoured birding spot was invaded for a third day running and our quarry - the vagrant adult drake STEJNEGER'S SCOTER - did not disappoint. In fact it had been performing well in the light swell just west of the Rossbehy spit since early morning but had gradually drifted further out in the bay, despite the incoming tide. Just as the majority of us arrived on site, it chose that moment to fly and joined four Common Scoters and flew about a mile west and disappeared.

A sharp-eyed Alan Lewis intercepted it some 15 minutes later in flight viewing from the high vantage point of the cul-de-sac and as it landed on the sea over a half-a-mile away, Chris Heard, Barry Reed and I were also able to get on to it. It then swam quite speedily back eastwards but after three long dives was sadly lost and it was some time before any further observers were to connect. Car-loads split up and began searching both ends of the bay and after taking advice from John Murphy and other informed Irish birders, Richard Bayldon and Stuart Elsom did very well in relocating the bird virtually two kilometres west of the main spit, about half a mile out in the bay. The bird was then to stay in this area for the rest of the day but with optical lenses of 60 and 70x and very good light conditions, adequate detail could be made out on the bird, including the head shape, bill cob protrusion, comparative size, bill colour, body colour and white wing markings.

There were many more Common Scoter wintering in the bay than I had bargained for - perhaps 700 or more - but fortunately only one 'white-winged' scoter. There were also impressive numbers of Red-throated and Great Northern Divers present, as well as Black Guillemots and commoner auks, and a nice selection of corvids, including Hooded Crows, Red-billed Choughs and Common Ravens.

Although early mornings particularly favour viewing from the beach and toilet block at the first 200 yards of the spit and dune complex at the east end of Rossbeigh, the cul-de-sac entered from just 100 yards as you rise high up the slope is inevitably the best place to search and where, if fortunate, the premium views may be experienced. Being so high in elevation allows one an ideal opportunity to scan the entire bay and to carefully browse through the scoter rafts.

The day was rounded off with a quick stop at Cromane Strand to see the wintering EURASIAN SPOONBILL, the same site yielding a Pale-bellied Brent Goose bearing two coloured rings (yellow ring with black 'H' on left leg and light blue ring on right leg).

Great to see Ed, John, Dermot, Colin, Aidan and the other Irish boys - thanks for your generous hospitality. Great people and a superb and immensely rare bird. Until next time.......
Lee G R Evans
Posted by Lee G R Evans at 20:06