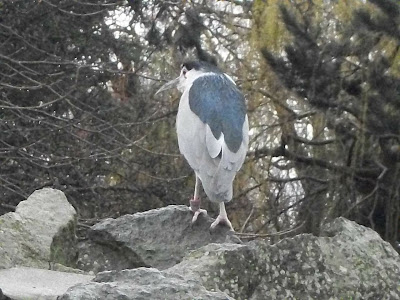 This colour-ringed free-flying adult BLACK-CROWNED NIGHT HERON is still surviving at Edinburgh Zoo - many many years after the population was initially released - thanks to Stewart for his images and observations.
County Recorder Stephen Welch has very kindly contributed
''Nice to see one of the remaining Night Herons on your blog*. As you may recall full information in LBN post 14943**. To summarise, the bird shown, red over blue left, was banded between 1983 and1987, hence age must be now at least approaching 24 years, a longevity record for this species''
Posted by Lee G R Evans at 18:22