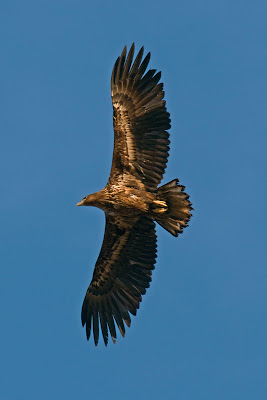 This exceptional image was taken of the Hampshire juvenile WHITE-TAILED SEA EAGLE by Keith Maycock. The bird is a juvenile in uniform brown plumage - 2nd-winter birds should be much more mottled white and dark brown below and the inner 3-4 primaries would be fresh and newly moulted (Dick Forsman)
I watched the eagle this morning, saw it a couple of times (10:10 & 11:35) and it followed the same route each time - picked up over woodland south of A337 at Ashley Clinton (c. SZ263935) then heading north over A337 towards Hooper's Hill. Flight line viewable from either A337 (see the churned up grass verges) or from Hordle Lane.
Between these sightings, the bird was seen by others from Angel Lane - presumably when it looped back south of A337 (Bob Marchant)
Posted by Lee G R Evans at 20:41