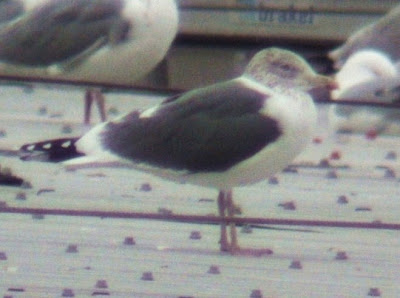 Hi Lee, as a Larid fan , I'm obviously fascinated by the appearance of the apparent Slaty-backed Gull at Rainham Landfill and hope to see it over the weekend. I have only limited experience of this species from the US West coast but it does look good from the pix if a trifle pale from my recollections. It does however reminds me somewhat of an odd gull which we had in Cheshire a couple of years ago.
This was a large bird, as big or bigger than the big Argentatus stood on the same rooftop. It had a broad secondary trailing edge, much more so than any other Gull stood nearby. This extended in to a broad, flared out, white tertial crescent, again much larger and broader than any nearby Gull. Its mantle colour was really individual in tone: much darker than Argentatus, "bluer" than LBB but not as dark as GBB, all of which were on the same rooftop. Its legs were a bright raspberry-pink colour and it had a greenish-yellow basal area to it bill with a brighter tip. The golden brown head , nape and upper breast streaking was different in tone and patterning than any of the nearby Gulls. Although we didn`t see this bird fly we did see it wing stretch when it appeared to have some white spots along the subterminal rear edge of the primaries, sadly this feature wasn`t photographed nor seen for long.
We concluded that it was a hybrid of some kind, possibly involving Argentatus but we did remark at the time the birds resemblance to a Slaty-backed Gull
Regards, PETE KINSELLA
Posted by Lee G R Evans at 21:07