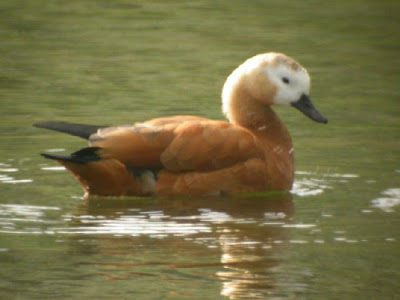 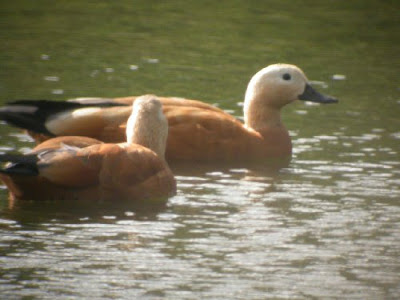 I was speaking to Lee Evans this morning about the status of Ruddy Shelducks in Britain and I thought it might be helpful if I reiterated some of Lee's comments. I've done a lot of work on the status of the species in Britain which culminated in papers in British Birds and articles in Birdwatch.
My understanding of the position is as follows.
Feral populations
There are three feral populations in Europe:
1) Moscow: there is a population based on Moscow Zoo that appears to be sedentary. They nest in and on buildings in Moscow but return to the zoo in winter, where of course they are fed. If I remember rightly, the population is in the region of 250 birds. There is no evidence that any of these have ever reached western Europe.
2) Askanya Nova, Ukraine. There is a more significant feral population based on the Askanya Nova steppe reserve in southern Ukraine. As I understand it, this basically is a set-up a bit like Slimbridge, where captive and wild birds mix in the grounds and are fed in winter. Ruddy Shelducks have bred there for many years and there is a feral population based on the 'zoo'. However, things have become very complicated for the following reasons. Firstly, the feral bred birds are now mixing with the nearby wild breeding populations along the Black Sea coast. Secondly, ringed zoo bred birds have been recovered with wild Ruddy Shelducks across southern Russia. Thirdly, wild Ruddy Shelducks from southern Russia are now wintering in numbers at Askanya Nova (where they also take advantage of the food provided) and so mixing with the feral birds there. The situation in Ukraine has, therefore, become completely blurred with a situation there that is akin to the position in Britain with the Gadwall, ie that it descends from a mixture of wild immigrants and captive escapes.
3) Switzerland. There is a feral population in northern Switzerland along the border with Germany that numbers around 450 birds. These gather to moult in July on Klingau Reservoir in northern Switzerland. Counts indicate that these birds are present and flightless at precisely the same time as the Dutch birds (see below) so the two populations are separate. However, even the situation in Switzerland may not be as clear-cut as originally thought. This is because Italian birders have noticed an increase in Ruddy Shelduck records in northern Italy (Po Delta etc) immediately before and after the Swiss moult and they think it possible that the Swiss moulting birds may now include wild Ruddy Shelducks from the small Balkan population.
4) The Netherlands. Every summer there is a large moult gathering at Emmeer in Utrecht. The highest count I came across for 2009 was 540 on 17 July, although recent reports indicate that 1,060 birds visited there this summer. The important point about this gathering is that, while a few pairs of escaped/feral Ruddy Shelducks may breed irregularly in Holland and Germany, there is no evidence whatsoever of a large self-sustaining feral population. German correspondents that I have dealt with are always bemused that there is a continuing myth in Britain of a large feral population in Germany - it does not exist. The simple fact is that the Dutch do not know where their moulting birds come from but Arnoud at least is of the view that they are likely to be genuinely wild immigrants from eastern Europe. Personally, I find it frustrating that the Dutch haven't caught any of their birds to either ring them or fit radio transmitters to them to solve the mystery once and for all.
Records in Britain are no doubt a mixture of escapes from captivity and birds that have either overshot Holland on their way to moult, or birds dispersing from Holland after moulting. This largely explains the July/August peak in Britain. Small parties on the East Coast are of course more likely to involve these Dutch birds. There are no feral populations in Britain although the odd pair has bred from time-to-time but they have never become established.
In 1892 and in 1994 there was a large influx of wild Ruddy Shelducks across northern Europe, with the largest numbers in Finland, Sweden, Norway and Denmark. I can't remember the exact total for 1994 off hand but I think it was around 350 birds. The records strongly indicated an origin in SE Europe/SW Asia, thought to have been provoked by desiccation on their breeding and/or moulting grounds. The BOURC would not accept that any wild birds occurred in Britain in 1994, despite good evidence to the contrary.
Posted by Lee G R Evans at 19:38