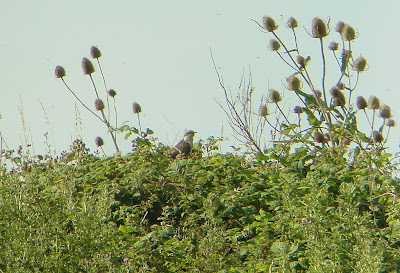 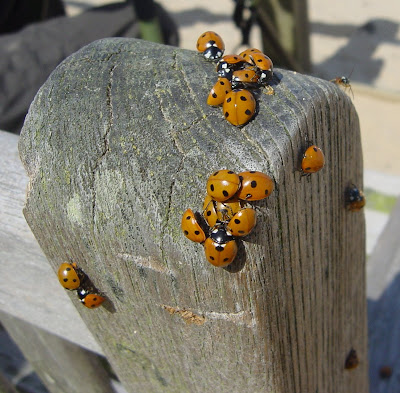 Due to a heavy work commitment of late, I finally managed to get to North Norfolk today where the adult-type GREAT SPOTTED CUCKOO first discovered by John Furse at Gramborough Hill, Salthouse, on 23rd July was still present.

For the majority of this 13-day period the heavily worn bird has been holed up in the dense Hawthorn and Blackberry scrub on the sea-facing slope of Weybourne Camp, just under a mile from where it was initially first seen. Since Saturday morning when it was relocated, it has been showing well intermittently in the scrub just west of the main building complex on the camp and was still present today, excellent views being attained by myself and 50 or so others for over 40 minutes early afternoon.

The bird is very heavily worn and is in adult-type plumage, with its silvery-grey ear-coverts and crest, paler forehead, creamy-yellow chin, throat, neck-sides and upper breast, white thighs, lower breast, vent and undertail coverts and grey mantle. The white scapular spots are very worn and abraded, as are those on the forewing coverts and across the upperwings, whilst in flight, the outer primaries are dark grey and there is no apparent warmth (rustiness) to any of the flight feathers. The upper tail feathers are dark and long with some whitish barring on the undertail apparent.

DIRECTIONS: Park in the designated car park on the A149 on the dangerous bend just east of the school in Kelling village (if full, park sensibly and courteously on the village road opposite) and then walk north towards the beach. After flanking the Kelling Water Meadows, turn right along its northern edge and then left after 70 yards towards the beach. Continue eastwards along the coastal footpath skirting the perimeter fence of the camp and after 100 yards, scan the low bushes and scrub west of the building complex and bunkers. The bird is typically mobile and has moved towards the eastern end of the compound in recent days but generally favours this area above.

It represents only the seventh record for Norfolk, with the most recent twitchable being at Blakeney Point and environs from 7-11 July 1992 (see Evans, Rare Birds in Norfolk, page 115, for a detailed analysis of previous records). There is a more recent record of an adult at Waxham, Sea Palling and Cart Gap on 28th March 1999 (published photograph in Birding World 12: 93).

When walking the final 50 yards to the beach at Kelling, one suddenly becomes aware of SEVEN-SPOT LADYBIRDS (Coccinella septempunctuata). They begin emerging from every blade of grass as you walk and fly up into your face as you march on. By the time you reach the shingle, the track is so covered with dead Ladybird carcasses that you cannot fail to realise that all is not right. This area and virtually all of the North Norfolk coast from Horsey west to Titchwell is plagued by these beetles, with a mass immigration involving many tens of millions if not billions. I and others stood waiting for the cuckoo to appear and became absolutely covered in them, frequently receiving an irritating 'nip' as they bit into the skin. This is the first invasion of the species since the long hot summer of 1976 and today in the light winds and hot weather, they were streaming in off the sea and making life quite unpleasant. They were massing on every fencepost, nettle, vehicle, person, building and shingle stone they could cling to and had presumably arrived from Central Europe.
Images by kind courtesy of Phil Jones
Posted by Lee G R Evans at 23:46