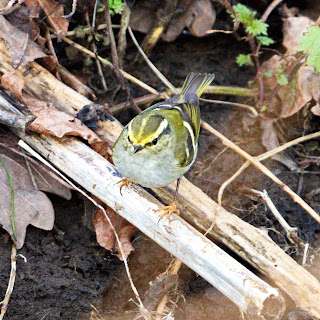 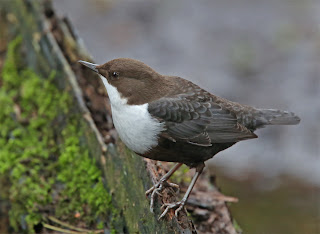 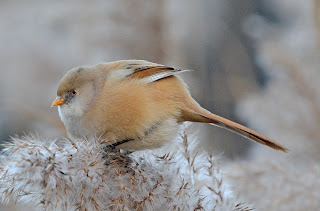 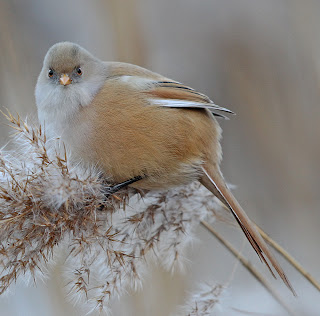 Seabird records are often incredulous and yet again this week we see another such occurrence. On 6 January, a dead WHITE-TAILED TROPICBIRD was found on the tideline at Mowbray Bank, SSW of Siloth (Cumbria), somewhat rotting but still relatively fresh. However, determining whether it was a bird washed overboard from a ship or a natural vagrant dying of starvation, is impossible to ascertain. The species has been occurring with more and more frequency in the Azores and Cape Verde Islands of late, so could be a realistic possibility for vagrancy to the UK or Ireland.

As we complete two weeks of January, the tally for 2013 stands at a fairly respectable 238 species. Lead rares include an overwintering PALLAS'S LEAF WARBLER at Eversley GP on the Berkshire/Hampshire border, roving back and forth with Long-tailed Tits and Goldcrests along the Blackwater River (county boundary) between 200 and 350 yards west of the footpath that leads down from the car park on Lower Sandhurst Road, NE of Yateley and NNW of Sandhurst, and a female DESERT WHEATEAR in Aberdeenshire on the beach by the lighthouse at Rattray Head. Most watched birds of this winter have been the two AMERICAN BUFF-BELLIED PIPITS that are commuting between the banks of Queen Mother Reservoir and the puddles of Kingsmead Quarry, east of the B376 north of Sunneymeads Railway Station (Berks).

An adult BONAPARTE'S GULL is being seen regularly on the Ogmore Estuary (East Glamorgan), 300 yards downstream of the Portobello House at around SS 865 765, with another being seen sporadically in Cardiff and an adult in North Cornwall at Padstow.on 14th.

An extremely confiding BLACK-BELLIED DIPPER in Norfolk has been particularly popular this year, favouring the River Thet in Thetford in the vicinity of the Three Nuns Bridges.

Just two GLOSSY IBISES are reliable this winter, those being at Marloes Mere (Pembs) and at Bickerley Common, South Ringwood (Hants), whilst GREAT WHITE EGRETS number up to an incredible 35 (including up to 7 in the Dungeness Area of Kent alone). A single CATTLE EGRET is wintering on the Somerset Levels.

East Anglia is currently offering a good crop of geese, with up to 4 Red-breasted Geese of unknown origin at North Warren RSPB, Aldeburgh (Suffolk), a party of 5 TUNDRA BEAN GEESE in fields near Westleton village (Suffolk), up to 63 TAIGA BEAN GEESE in the Yare Valley at Buckenham RSPB (Norfolk) and BLACK BRANTS at Cley NWT (Norfolk), Holkham Fields (Norfolk) and Levington Creek (Suffolk). The only Ross's Snow Goose of this winter remains that adult of suspect origin with 5 Barnacle Geese, widely ranging with Pink-footed Geese in Norfolk Broadland. Elsewhere, vagrant CANADA GEESE number up to 8 birds in Scotland, with the South Coast adult RED-BREASTED GOOSE now with 1,000 Dark-bellied Brent Geese on Thorney Island (West Sussex).

Few rare waders this winter to see outside of a LESSER YELLOWLEGS in South Devon at Ernesettle Creek, a TEMMINCK'S STINT at Stockland Reach, Steart (Somerset) and a LONG-BILLED DOWITCHER in South Wales on the Gann Estuary (Pembs).

A RICHARD'S PIPIT is present for a fifth day on the Somerset coastline, on the seawall near Dowlais Farm on the Yeo Estuary at Clevedon, whilst the UK's first-ever overwintering WESTERN SUBALPINE WARBLER continues elusively in gardens on Princess Street and Pleasant Terrace in St Just (Cornwall). It is a good winter for SIBERIAN CHIFFCHAFFS with perhaps as many as 45 birds overwintering.

In Central London, two juvenile BEARDED TITS, initially trapped and ringed at Rye Meads (Herts) last autumn, have been wowing the crowds in Kensington Park, performing at literally just yards range on top of the pamphus seedheads along the Serpentine edge adjacent to the Princess Diana Memorial Fountain. Although parking is very expensive in the vicinity, walking from a variety of tube stations takes only minutes, with the views these two birds are giving, simply irresistible. You will never see Bearded Tits better.

In IRELAND, a LONG-BILLED DOWITCHER remains for a second day at Lady's Island Lake (County Wexford), the long-staying CATTLE EGRET remains at the organic piggery at St Johnston (County Donegal), the adult BONAPARTE'S GULL is in Sandy Bay at Larne Harbour (County Antrim), the AMERICAN COOT continues on Murloch (County Galway) and the FORSTER'S TERN by the Mutton Island Causeway near Nimmo's Pier (County Galway). There are easily 12 different RING-BILLED GULLS on winter territories in Ireland.

PremierBirdNewsForTheUKandWP - the New Bird News service from the UK400 Club. On special offer for a limited period only at just £12.00 per year. Allows full access to the club's database, with full details of where and when to see some 190 individual scarcities thus far in January 2013.