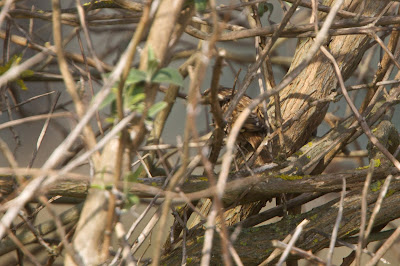 Following on from a few early OSPREYS and the first wave of GARGANEYS, temperatures of up to 64 degrees fahrenheit today induced a vagrant SHORT-TOED TREECREEPER into East Kent at Samphire Hoe Country Park - the 275th species of the year in combined Britain and Ireland. Found shortly after midday, the bird remained on view until late afternoon, generally favouring the Birches and small plantations alongside the railway, up to 300 yards away from the Information Centre. Simon Knight managed a few record shots, published above.

Otherwise, it was very much the same as it has been - the showstoppers all still in situ

COMMON YELLOWTHROAT still moving about the hedgerows adjacent to Rhiwderyn village in Gwent (South Wales) (but much more difficult now to locate due to the small number of people now visiting the site), the male SPANISH SPARROW in Calshot village (Hants) (Bruce Gwynn still putting in a sterling effort and allowing access to his girlfriend's house to view the feeders - please note though that Bruce will soon be away for 6 weeks), the male DARK-EYED JUNCO in the clearing NW of the car park at Hawkhill Inclosure, New Forest, west of Beaulieu and the singing male PADDYFIELD WARBLER in phragmites in the vicinity of the third bench west of the Breaches Pool at Pagham harbour's North Wall.

Still numerous GREAT WHITE EGRETS to see, including up to 5 in the Shapwick Heath NNR area (Somerset) but no recent reports of the Kirkby-on-Bain Landfill Site (Lincs) White Stork of unknown origin.

GLOSSY IBISES continue to make headlines and one must now ponder on why several flocks are migrating/dispersing even further north in spring; up to 5 remain on the island of Eigg (Highland) with 3 in the Gibraltar Point area (Lincs), the long-stayer at Leighton Moss RSPB (Lancs), 4 together at Reedham (Norfolk Yare Valley), the singleton at Minsmere RSPB (Suffolk), 8J9 in Essex at Lofts Farm GP, Maldon, 2 at Stodmarsh/Grove Ferry NNR (Kent) and the 3 still at Marloes Mere (Pembs).

Rare wildfowl include a SNOW GOOSE with Greylag Geese at Douglas Water (Clyde) (most wintering Ross's Snow Geese have now departed NNW with Pinkfeet), up to 10 singleton vagrant GREENLAND WHITE-FRONTED GEESE remain at various sites from Hampshire to Suffolk, several TUNDRA BEAN GEESE flocks including 15 at Maidens Hall Lake, Red Row and 3 RED-BREASTED GEESE of probably genuine origin: a first-winter with Barnacles in Dumfries at Southerness Point, a first-winter with Brents at Needs Ore Point (Hants) and an adult with Brents at Kirton Creek, north of Felixstowe (Suffolk).

The drake AMERICAN WIGEON remains at Angler's Country Park (West Yorks), as does the drake at Exminster Marshes RSPB (South Devon) but there was no sign today of the drake at Marlingford Mill, Norwich (Norfolk) that has been present the past week. No less than 12 NORTH AMERICAN GREEN-WINGED TEALS are to be found, with the first-year drake BLUE-WINGED TEAL on Lower Moors, St Mary's (Scilly), drake LESSER SCAUPS at Cosmeston Lakes CP, Cardiff (Glamorgan) and St John's Loch (Caithness), drake RING-NECKED DUCKS at both Par Beach Pool and College Reservoir in Cornwall and SURF SCOTERS at several sites, including the long-stayers at Penzance (Cornwall) and in West Wales. The juvenile female BUFFLEHEAD from Helston Loe Pool (Cornwall) seems to have moved on, whilst there ha sbeen no further sign of the adult female Hooded Merganser of unknown origin in Kent since 5th March.

Several ROUGH-LEGGED BUZZARDS remain on winter territories, the easiest to see being the juvenile at Burpham (West Sussex), whilst 2 COMMON CRANES on Worth Marshes, Sandwich (East Kent) are likely continental migrants.

On the wader front, Scotland's first-year GREATER YELLOWLEGS is now at Starnafin Farm, Loch of Strathbeg RSPB (Aberdeenshire) (since 7th) with the long-staying LESSER YELLOWLEGS in West Cornwall near Saltash. Avon's adult SPOTTED SANDPIPER is now showing again at Chew Valley Lake, with sporadic appearances of both the LONG-BILLED DOWITCHERS in Wigtown Bay (Galloway) and Lodmoor CP (Dorset). The wintering PECTORAL SANDPIPER also remains in Ayrshire.

Surprisingly, despite the temperatures, no Hoopoes have yet been found on the South Coast of Britain, but Sand Martins are now starting to arrive in numbers as well as the odd Barn Swallow. An incredible 37 WATER PIPITS are gathered at the water meadows beside the Stour river at Stodmarsh (Kent) with Black Redstarts arriving in good numbers and dribs and drabs of Northern Wheatears. I expect the first White-spotted Bluethroat any day now.

At least 6 YELLOW-BROWED WARBLERS remain from the winter with perhaps a migratory bird at the Paraxel buildings in Worthing (West Sussex) for two weeks now. Three different ROSE-COLOURED STARLINGS have proved popular with singles in Holyhead, Muirtown (Ayrshire) and Hordle village (Hampshire)
Posted by Lee G R Evans at 23:56