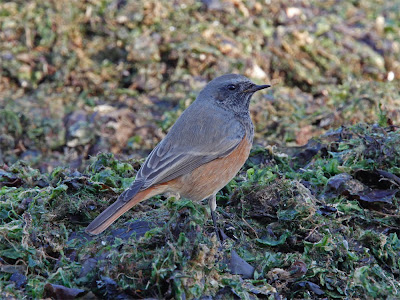 A male EASTERN BLACK REDSTART is present for its third day at Walpole Bay, Margate (East Kent), favouring the chalk cliffs and adjacent beaches around the sheltered cove immediately north of the Palm Bay Cafe. The latter is located at Postcode CT9 3DH and accessed along the coastal B2051 east of Margate town centre. The bird was discovered by local patch worker Barry Hunt and is particularly confiding and consequently very photogenic. Remarkably, it follows at least three records in Scandinavia this autumn.

It represents the first confirmed record of this form in Britain
Posted by Lee G R Evans at 18:20