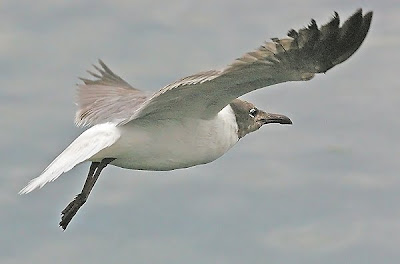 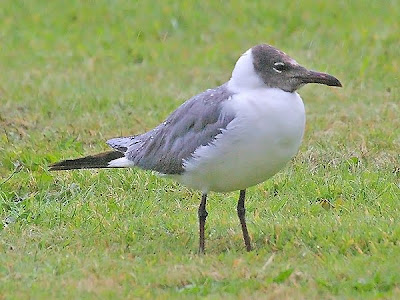 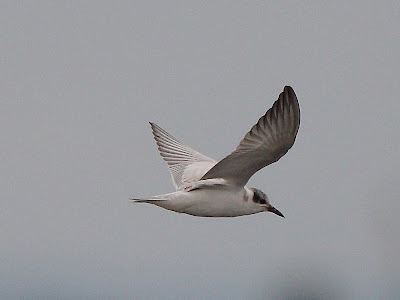 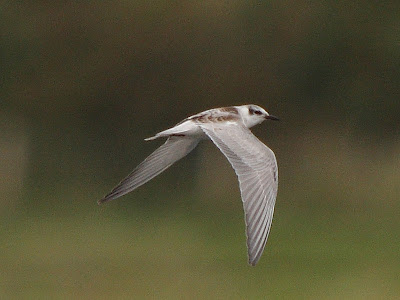 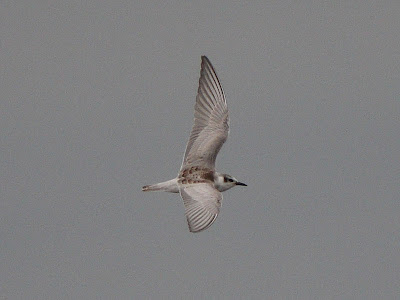 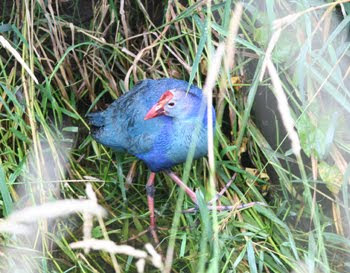 A presumed escaped adult GREY-HEADED SWAMPHEN (Porphyrio caspius) continues to show very well today in Clwyd (see the excellent shot by Nick French above), favouring a roadside vegetated ditch with Moorhens opposite the Morrison's supermarket building site SW of Chester at Saltney just south of the A 5104 (SJ 377 648). It is a very confiding individual and is in pristine plumage condition and has been present in the area for at least a month.

Most recent records of 'Purple Gallinules' in Britain have involved this highly migratory species from Asia, including those in Cumbria and Cambridgeshire. When last investigated, this species was fairly common in captivity, and breeding took place in at least 12 localities.

Nice to see some adult Nearctic waders appearing at last (although we could well struggle for juvenile waders, with Long-tailed Skuas and other Arctic predators having to feed on baby waders following another Lemming crash year - the 14th in succession), with a LESSER YELLOWLEGS (and 3 Wood Sandpipers) at Inner Marsh Farm RSPB (Cheshire) and a SEMIPALMATED SANDPIPER for its third day at Port Carlisle (Cumbria), showing well on the shoreline on the ebbing tides off of the layby opposite the caravan park (found yet again by area birding supremo Darren Robson).

Also present and very popular was the beautiful juvenile WHISKERED TERN at Reclamation Pond, Teesmouth (Cleveland), now present in the area for its 5th day, and superbly captured on film by Mark Newsome (see above images). Full juveniles are very rare in this country. The bird later commuted back to Saltholme Pools. Meanwhile, Staffordshire's moulting adult FRANKLIN'S GULL was relocated today, feeding in a ploughed field with Black-headed Gulls opposite the Fishermen's Car Park at Gailey Reservoirs (accessed east of the M6 junction 12).

A family party of 9 RUDDY SHELDUCKS has now moved further south from Aberdeenshire to Angus, showing today from the Shelduck Hide at The Lurgies Reserve at Montrose Basin

In North Kent, an adult PECTORAL SANDPIPER is present, along with up to 21 Spotted Redshanks and a EURASIAN SPOONBILL, at Elmley RSPB Reserve (from the Counterwall Hide).

Over 30 EURASIAN SPOONBILLS were counted in East Anglia today, with 17 at Cley Marshes NWT North Scrape (North Norfolk) and 15 on Havergate Island (Suffolk), whilst a HOODED CROW has attracted a great deal of interest, being twitchable in the Kelling and Salthouse area for much of the day. The summering female FERRUGINOUS DUCK remained on Island Mere at Minsmere RSPB Reserve (Suffolk) today, as did the Fulvous Whistling Duck of captive origin at Loompit Lake, Trimley (Suffolk).

Quite a few OSPREYS are now on the move, with several taking up early autumn territories along the South Coast. Likewise, an influx of GARGANEYS is now apparent, and large numbers of juvenile MARSH HARRIERS are now being seen in the south.

The annual northeast coast build up of post-breeding ROSEATE TERNS is now taking place, with up to 15 on Sandhaven Beach at South Shields (County Durham)

Two EURASIAN SPOONBILLS are in County Waterford at Dungarvan, showing well from the Helvick Road at midday
Posted by Lee G R Evans at 23:23