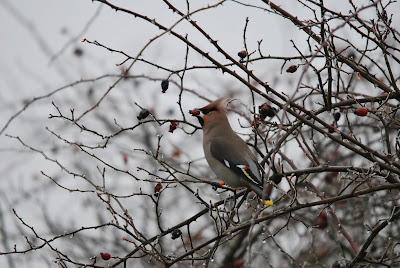 This colour-ringed BOHEMIAN WAXWINGS, currently part of a flock surviving in Maldon, Essex, was originally ringed in Aberdeenshire on 9 November 2008 (Simon Patient).
Peter Allen published this recent correspondence, after cotacting the Waxwing Co-ordinator Ray Duncan.
"Thank you very much for your colour-ringed Waxwing sighting and accompanying photograph. Ringing and sighting info below. IT HAS LOST A COLOUR RING…..AAAArrrghhhh. This is only the 2nd time (that I know of) that a Waxwing has lost a colour-ring during a winter in the UK. Two returning birds one and three winters later still had their treble combinations intact. We haven’t used double orange so it’s still identifiable as an individual, assuming we don’t have any more ring losses! Thanks again for reporting this bird. Any further sightings gratefully received.
Raymond Duncan
(Grampian Ringing Group secretary) "
RINGING HISTORY
OLO
NW41903
09/11/2008
Scotstown Rd, Bridge of Don, Aberdeen
3m
GRG